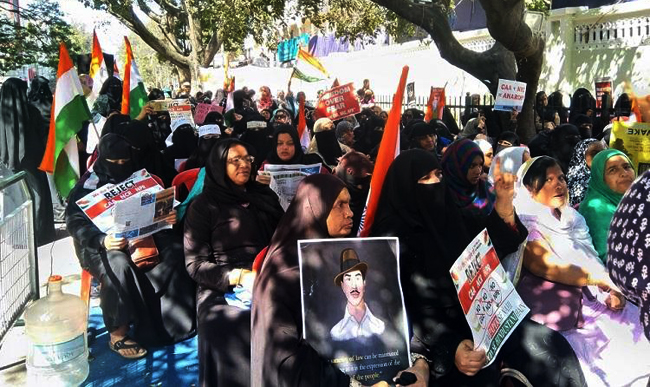 Bengaluru, Jan 25: Several women have completed a 24-hour protest here against the Citizenship Amendment Act (CAA) and are going strong to stretch it to 48 hours.

"More than a thousand women gathered on the Masjid Road at Frazer Town to denounce the CAA and National Register of Citizens (NRC)," participant and Mount Carmel College student Noor Zahira told IANS.

The women protesters extended their support to the students in Jamia Millia Islamia, the Aligarh Muslim University, the Jawaharlal Nehru University and others who were recently roughed up allegedly by police and masked goons.

Zahira, 20, said the women's protest was planned only for 24 hours but is continuing to touch 48 hours.

Starting 3pm on Thursday, the women, several of them in burqas, niqabs and hijabs, are sitting on the road just outside the Haji Sait mosque in Frazer Town in a flash protest. Though they have informed the police, they did not wait for the permission. Around 11 pm, police arrived and shut off the protesters' loud speakers.

Zahira said already four such women's anti-CAA protests were taken out in Bengaluru. Women from all ages groups have joined the protest and are sloganeering.

As the women are protesting on the road, men are guarding them standing on the opposite road, ensuring all supplies such as food and others to them, she added.

"Muslim women were not alone in denouncing the CAA... we were joined by the transgenders, Hindu women, Christian women, Dalits and others, " she said.

Some of the protesters also indulged in creative work such as composing songs against the CAA and making placards.

Though four anti-CAA women's protests happened at the Town Hall and other landmarks in Bengaluru, they were only a few hours long.

The protesting women are also showing support to women protesters at Shaheen Bagh in Delhi who were accused of demonstrating for Rs 500. However, the protest did not align anti-CAA demonstration with any political party, keeping it apolitical.