BJP’s win is the victory of democracy: B S Yeddyurappa 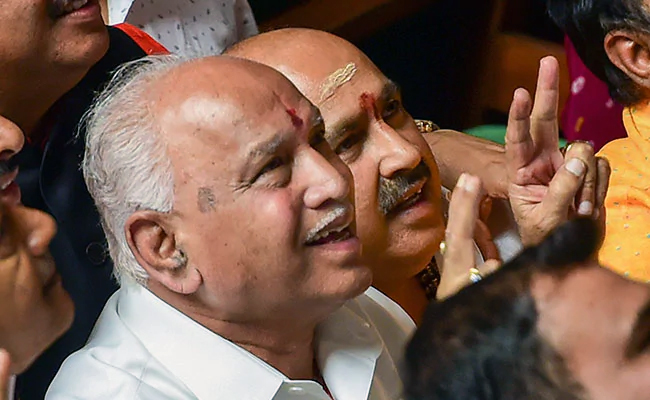 "It is the victory of democracy. People were fed up with the H D Kumaraswamy government. I want to assure the people of Karnataka, that a new era of development will start now onwards," Yeddyurappa said.

Earlier today, the confidence motion moved by Kumaraswamy got 99 votes as against 105 of the opposition leading to its defeat.

This brought an end to the 12-day high tension political drama which had been going on in the state with the BJP on one side and the Congress-JD(S) on the other.

Yeddyurappa added that the BJP led government which is about to be formed in the state will focus on the farmers and ensure their happiness.

"Farmers were suffering due to drought and other factors. We assure the farmers, we will give them more importance to ensure they live happily and take appropriate decisions as early as possible," Yeddyurappa added.

The BJP supporters have started celebrating at the party's state office in Bengaluru after HD Kumaraswamy led Congress-JD(S) coalition government lost trust vote in the assembly.

Kumaraswamy has sought an appointment with Governor Vajubhai Vala to tender his resignation.

BJP’s win is the victory of democracy: BSY

Today the People's elected MLAs have cheated the people who voted them with the good trust,

These criminal MLAs for the sake of money from BJP  have betrayed their people  by whose vote they won.

The Almighty God is the greatest Planner.  Let us wait and see.