Mysuru, May 7: Activists of the BJPprotested in the city wearing black ribbons to express their outrage against what they called the ‘abuse’ of power by Karnataka home minister MB Patil. The activists, who assembled near the deputy commissioner’s office on Monday, raised slogans against Patil, whom they accused of failing to act against former MLA Belur Gopalakrishna and JD(S) MLA Narayanagowda. While Gopalakrishna has been accused of instigating the public to kill Prime MinisterNarendra Modi, Narayanagowda allegedly threatened Kannada film actors Darshan Thoogudeepa and Yash, who campaigned for actress Sumalatha, an Independent contesting in the Mandya Lok Sabha constituency. 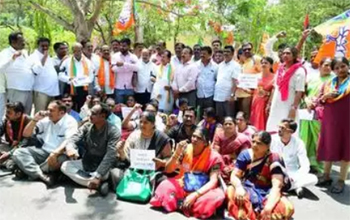 The protesters alleged that both leaders in question had tried to disrupt peace in society. “Despite the seriousness of these cases, the state home department has failed to initiate any action against them. Even the media is being threatened by the coalition government,” the BJP activists alleged.

Taking a swipe at chief minister HD Kumaraswamy, who recently stated that he was none too keen on interacting with the media, the protesters said, “The CM recently hailed a senior journalist for posting a message that was critical of the coalition government.”

The BJP workers charged the Karnataka home department of intimidating, and mentally harassing Mahesh Vikram Hegde, Shruthi Bellakki, Hemanth Kumar and Abhijit Shetty Heranji by filing false cases against them. “Cases are being filed to muffle those voices questioning the functioning of the coalition government. This is an attempt to curb their freedom of expression. The governor must take heed of the situation, and ensure that principles of democracy and fundamental rights of the people are protected,” the protesters said.

Kote Shivanna and BJP’s Mysuru city unit president BP Manjunath were among those who participated in the protest.