Bengaluru, Feb 28: BS Yediyurappa’s contribution to the economy is substantial, and he is one CM who has contributed largely to making India the fifth largest economy, said Defence Minister Rajnath Singh on Thursday. 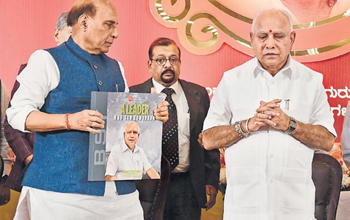 “He will ensure that Karnataka contributes towards making India the third-largest economy in the coming days,” Singh said, who had flown from New Delhi to participate in the CM’s birthday celebrations.

Singh recalled Yediyurappa asking him how to increase welfare measures for farmers, and had suggested that the CM reduce interest rates on loans to help the community. “Yediyurappa took the suggestion seriously and reduced interest of loans to a mere 4 % and gradually reduced it to 1 % before coming down to zero,” Singh said, appreciating Yediyurappa’s love for farmers.