Can't express pain I go through every day: HDK 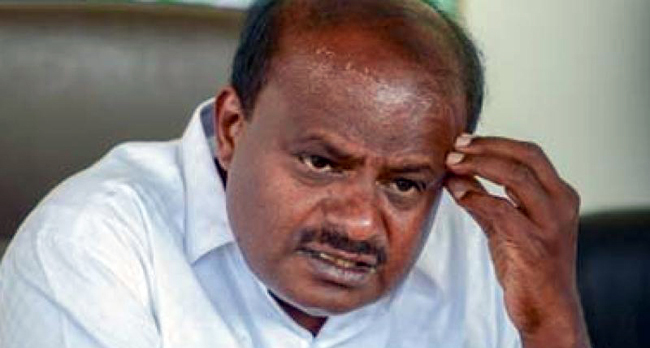 Channapatna, Jun 19: In what is being inferred as a sign of rift in the Congress-JD(S) coalition, Karnataka chief minister HD Kumaraswamy said that he cannot express the pain he goes through every day as he has to run the government smoothly.

"I promise I will fulfil your expectations. I can't express the pain I am going through every day. I want to express it with you, but cannot. But I need to solve the pain of people of the state. I have the responsibility of running the government smoothly," Kumaraswamy said at an event on Tuesday.

Kumaraswamy further alleged that one of his party MLA was offered Rs 10 crore by the BJP.

"One of our MLAs called me after he got a call by a BJP leader. They offered him Rs 10 crore to leave JD(S) and join BJP. These attempts are being done continuously by BJP leaders. But by God's grace and your blessings this government is safe for another four years," he said.

On Wednesday, Congress leader and former Karnataka chief minister Siddaramaiahon said that there is "no threat" to the coalition government in Karnataka.

"There is absolutely no threat to the government in Karnataka, there is no problem. They (BJP) are trying desperately but they will not succeed," Siddaramaiah said in Delhi.

Can't express pain I go through every day: HDK