Mysuru, May 1: Perpetuation of the caste system posed a grave threat to the ethos of India, warned acclaimed Kannada writer Moodnakudu Chinnaswamy here on Tuesday. 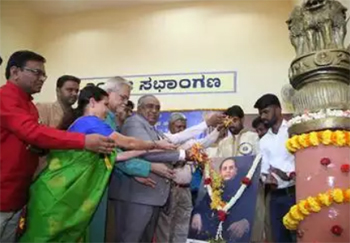 Chinnaswamy, participating in a seminar on ‘Ideologies of BR Ambedkar’ organised by the Kuvempu Institute of Kannada Studies, University of Mysore at the BM Shri Auditorium, recalled Ambedkar’s tireless crusade against caste in India, juxtaposing the vision of the architect of India’s Constitution with the importance caste was being accorded in the country today. “India is steeped in caste. Those belonging to the upper castes cling to their communities since it gives them the right to dictate the culture of India. It is those belonging to Dalit communities who should disown their respective castes, and work towards establishing a society without it. Ambedkar said that democracy would not survive on the basis of caste, and showed us the path of The Buddha,” Chinnaswamy said.

The author decried the miserable position that Dalits found themselves in even after seven decades of Independence. “In Ambedkar’s day, Dalits were treated in a manner that was inhuman. It is sad that this culture is still prevalent in today’s society. We are living in a society wherein individuals are not being respected. AMbedkar exhorted citizens to unitedly pull the chariot of equality, but is sad to see the ruling party in New Delhi trying to establish a society entrenched in Brahminical principles, and Dalits and the backward classes are supporting this endeavour. Majority of the country’s wealth rests with around 41% of the upper castes, whereas those belonging to Scheduled Castes/ Scheduled Tribes (SC/STs), who constitute 27% of the Indian population, own just 11% of the nation’s assets. Reservation has not helped them,” added Chinnaswamy.

‘Democracy in India a farce’

Chinnaswamy opined that the existing multi-party system in India had put imperiled democracy in the country. Dubbing democracy as practiced in India a ‘farce’, the author added, “There should be some criteria for candidates to contest the polls. Today, an 80-year-old can contest elections, and can help his grandsons enter the fray at the same time. Ambedkar had warned the country about the danger of unconstitutional methods, describing them as components of Grammar of Anarchy, which is what we are contending with today. Intellectuals are forced to stay silent. On social media platforms, they are reviled. Independent organisations too are silent in India today.”

Prof NM Talavar, Nanjaiah Honganuru and Vijayalakshmi Karikal were among those who attended the seminar.