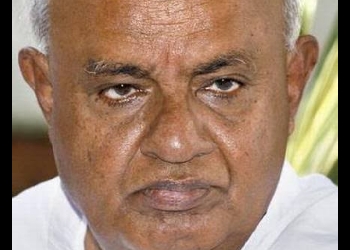 Bengaluru, Jun 7: Suspense over JD(S) patriarch HD Deve Gowda contesting the Rajya Sabha polls from Karnataka with Congress' support continues as KPCC president D K Shivakumar on Saturday said the party has fielded one candidate and the high command will decide on what do with surplus votes.

"Whatever our national leadership will decide... For now we are fielding only one candidate, regarding surplus votes whatever our high command says, we will abide by it," he said in response to a question about supporting Deve Gowda.

Polls for four Rajya Sabha seats from Karnataka is scheduled for June 19.

The Congress, which can win one seat with its strength in the assembly, has fielded veteran party leader Mallikarjun Kharge as the candidate, while the BJP is yet to decide on candidates for two seats it can win.

The JD(S), which has 34 seats in the assembly, is not in a position to win a seat in Rajya Sabha on its own, and will need support from one of the national parties with their surplus votes for this.

Minimum 44 votes are required for candidates to win.

Speculation is rife that congress is likely to support JD(S) with its surplus votes if the regional party fields Mr Gowda, and in return may seek favour during legislative council polls slated later this month.

Though JD(S) legislators are of the unanimous opinion that Mr Gowda should contest Rajya Sabha polls, the 87-year-old leader is said to be undecided and weighing options.

If he contests and wins, this will be the second Rajya Sabha entry for him, the first time being in 1996 as Prime Minister.

June 9 is the last date for filing nominations.

Stating that on June 8, Mallikarjun Kharge will file his nomination for Rajya Sabha polls, DK Shivakumar requested party workers not to come to Congress office or Vidhana Soudha, where the nomination will be filed, because of the COVID-19 pandemic.

"Let your love and affection continue, but let's not create problems by gathering here. After the election is over, and once he (Kharge) wins, you can greet and congratulate him. Let's not bring a bad name to his seniority for not maintaining social distancing by gathering," he said.