Shivamogga, Apr 17: Former chief minister and BJP state president BS Yeddyurappa on Tuesday claimed that the Congress is ready to stoop to any level to win the elections and it is trying to divide Hindus to improve its voting percentage and Lok Sabha seats in the state. 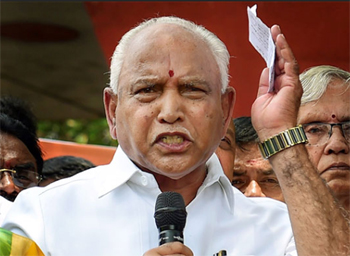 Speaking to reporters here on Tuesday, he stated that the Congress policy will boomerang on that party in the Lok Sabha election.

“Congress is trying to sow the poisonous seed of separate religion for Lingayats again. It didn't learn any lessons from the assembly election defeat,” he said.

He also alleged that chief minister H D Kumaraswamy is crying in public events to cheat the voters and emotionally blackmail them. “This is the worst-ever government I have ever seen,” he said.

He expressed confidence that after the Lok Sabha election, he will get another golden opportunity to form the government.

He also stated that there is nothing political in I-T raids in the state. “The fact is that the JD(S) is using the contractors to distribute money to the voters. Now they are facing a problem,” he said.

BY Vijayendra, younger son of Yeddyurappa, who was present at that time, stated that Yeddyurappa will never retire from the politics.

Vijayendra also took a dig at chief minister Kumaraswamy for using tears as a weapon to blackmail the voters.

“I think henceforth he needs to keep on crying as the Mandya voters will teach him a good lesson,” he said.

“Annana Notu-Akkange Vote (Note of CM Kumaraswamy-Vote for Sumalatha) has become very popular across the Mandya. Mandya people will teach a good lesson to the Gowda family's politics,” he said.

He alleged that in the past nine months, a few contractors close to CM Kumaraswamy amassed huge wealth.

A few minutes before the take-off, officials of an election flying squad stopped the helicopter of Yeddyurappa and carried out inspection. The officers checked the bags kept inside the chopter.