Crack on land near Manipal: Residents urged not to be panicked 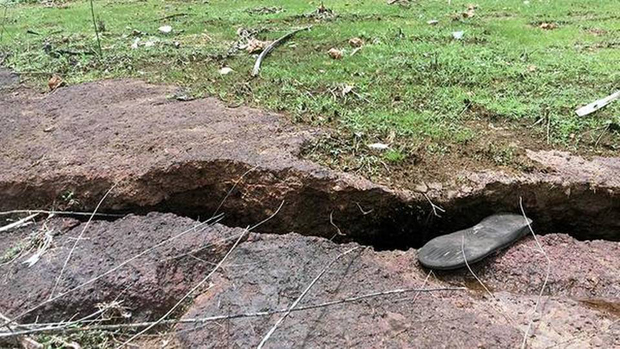 Udupi, Jul 20: The officers and experts who visited Manchikere near Manipal where residents had complained of a 90-metre-long crack becoming wide, have urged the locals not to be panicked.

The crack was first noticed in 2014. Geologists had then visited the area and attributed the crack to a minor seismic activity. After that nothing happened for the next four years. But residents say that the width of the gap has now increased.

Ranjinaik S G, the District Mines and Geology Officer, after visiting the spot on Wednesday, admitted that the crack appeared to have widened in the last fortnight.

It had widened from about half-an-inch in some places and to about an inch in others. This had happened because Manchikere was a loose geological formation or a weak zone.

“But there is no need for people to fear. There is no immediate danger to the house through which the crack has passed through. Further study on the crack and the area will be taken up soon by the department,” he said.

Residents of Manchikere on Tuesday complained that the crack had widened. The crack that passed through a section of a house belonging to Ramesh Nayak and also through a well had also widened, making people anxious.

Crack on land near Manipal: Residents urged not to be panicked