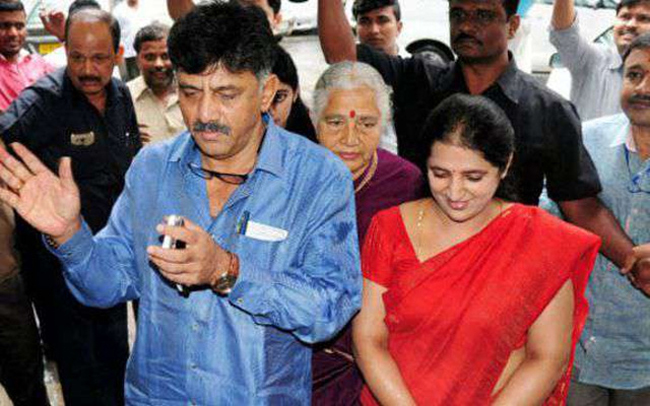 New Delhi, Oct 16: The wife and mother of jailed Congress Karnataka leader D.K. Shivakumar on Tuesday approached the Delhi High Court challenging the summons issued to them by the Enforcement Directorate.

The matter will come up for hearing on Wednesday. Gowarama, the mother of the Congress leader and Usha Shivakumar, his wife have approached the court seeking quashing of the summons issued against them. They were earlier summoned by the ED on Wednesday, October 17. The ED has earlier questioned Shivakumar's daughter Aishwarya; his brother and MP D.K. Suresh; and Belagavi Rural MLA Lakshmi Hebbalkar.

Earlier in the day, the high court heard the regular bail plea filed by Shivakumar. During the course of hearing, Shivakumar's legal team led by senor advocate Siddharth Luthra argued that the case against their client is a result of political rivalry. The court was also appraised of the medical condition of Shivakumar. His counsel told the court that the former leader underwent a surgery in last month and is in custody for more than a month.

Justice Suresh Kumar Kait, who was hearing the bail plea, has now posted the matter for October 17. On the next date of hearing, the probe agency will put forth its stand.

Meanwhile, during a separate hearing in the Rouse Avenue Court, Shivakumar was produced before the court of Special CBI Judge Ajay Kumar Kuhar. Shivakumar, who was arrested on September 3, in connection with a money laundering case is still in judicial custody more than a month after his arrest. His judicial custody was extended till October 25 on Monday

Shivakumar is a former Water Resources and Power Minister of Karnataka. He is also seen as crucial to the Congress party in the state. An I-T raid at his New Delhi apartment on August 2, 2017, led to the seizure of unaccounted cash amounting to Rs 8.83 crore.