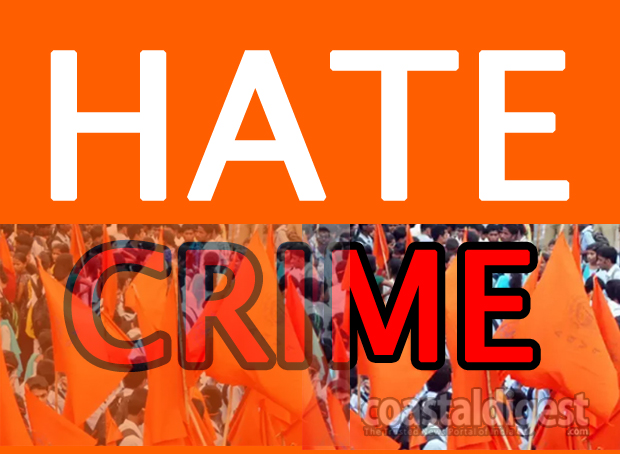 Bengaluru, Jul 17: Coastal Karnataka’s Dakshina Kannada has quietly emerged as the number one district in entire India for hate crimes, according to Harsh Mander, noted activist and director of the Centre for Equity Studies, New Delhi.

During a panel discussion in Bengaluru on Tuesday examining the growing intolerance in India, Mandar revealed that Karnataka is the second-biggest state for hate crimes.

“The situation in Karnataka is much worse. Figures show Dakshina Kannada as the number one district in the country for hate crimes,” he said.

Sharib Ali of the Quill Foundation, which documented hate crimes in the country over a five-year period, said that 948 incidents of hate crimes have been reported since 2014, including 117 lynchings, 258 physical assaults, other cases of mosque and church attacks, communal tension and harassment. The nationwide number of victims stands at 11,722, with 108 people killed. Karnataka saw 111 incidents and 553 victims.

This trend is dangerous, said Mander unequivocally linking the spike in violence to the far-right rhetoric of the Modi regime. “They are legitimising hatred for minorities that we did not know existed,” he said and categorised the choice of voters in 2019 elections as one which will have grave implications on the country’s social fabric.

“India could have voted for progress, salvaging an economy in shambles and confronting the rising farm distress. Instead, it chose to vote in favour of masculine Hindutva,” he added.

In this new India, Ali cautioned that the Modi regime was creating a climate whereby violence was being glamorised and those committing it were elevated to “heroic” status. “But at the core, lynchings are an act of reconstructing social order to show minorities their place,” he added.

Mander compared the current situation in the country to Germany of the 1930s.

“After the war ended, young Germans asked their parents why they did not stop the Nazis from persecuting the Jews and trying to conquer Europe. Their answer then was ‘we didn’t know.’ “We in India do not have the luxury of such ignorance,” he said.

Evoking what he described as Mahatma Gandhi’s dedication to humanity, Harsh Mander recounted an incident from 1947, when Gandhi who was invited to visit Pakistan, turned down the offer claiming he could not leave Delhi until a Muslim boy in India could walk the streets without fear.

When Mander segued into last year’s lynching of the 16-year-old son of an Imam at Asansol, which reportedly prompted the local Muslim community to protect Hindu homes and shops in an effort to defuse an inflammatory situation, there was not a dry eye in the house.

The violence of the lynch mob is reflective of the fact that Mahatma Gandhi’s work is still not done, Mander lamented.