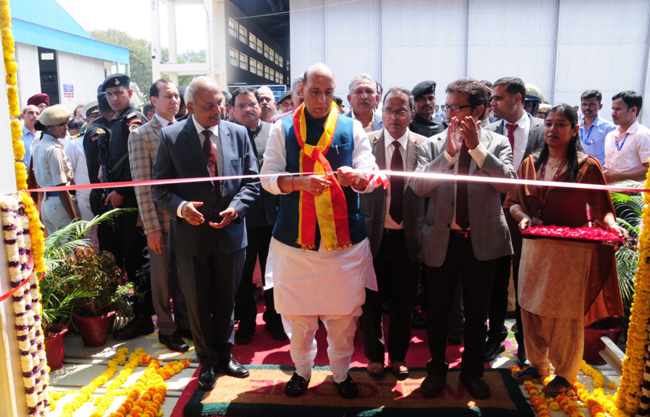 According to an official statement, the Defence Minister said in the last five years, India has made significant progress towards manufacturing military equipment indigenously under the 'Make in India' initiative.

Stressing that the defence industry plays a major role in the economic development of the country, Singh lauded the significant contribution of organisations like HAL.

Highlighting the Rs 35,000 crore exports target set for the coming years, he expressed confidence that HAL, through its various platforms, will contribute significantly to achieve this milestone.

According to the statement, Rajnath Singh commended HAL for being the backbone of the Indian Air Force and meeting the requirements of the Armed Forces.

"The HAL has excelled both in operations and finance in the last five years. It has achieved operational clearance on seven platforms, including Light Combat Aircraft and Light Combat Helicopter, and overhauled platforms like Hawk and SU 30 MKI," he said.

He also appreciated that HAL had a turnover of Rs 19,705 crore till March 2019 and it gave shareholders a healthy dividend of 198 per cent.

HAL also apprised the Defence Minister on the progress of the new design and development programme of indigenous Indian Multi-Role Helicopter (IMRH), the statement informed.

The full-scale mock-up was showcased to Rajnath Singh. The IMRH is proposed as a replacement to the existing medium-lift helicopters such as Mi17's, Kamovs and Seakings which will phase out in the next eight to ten years.

LCH is a 5.5-tonne class combat helicopter designed and developed by HAL. It is powered by two Shakti engines and inherits many technical features of the Advanced Light Helicopter. LCH has the distinction of being the first attack helicopter to land in Forward Bases at Siachen, 4,700 mts above sea level with 500kg load.