Did not say government will fall: Yeddyurappa

Kalaburagi, May 14: State BJP president BS Yeddyurappabacktracked on his comments that there would be a “positive atmosphere” for his party to form the government after the Lok Sabha election results are announced on May 23, insisting that he never said the coalition government will fall or that he would become chief minister. 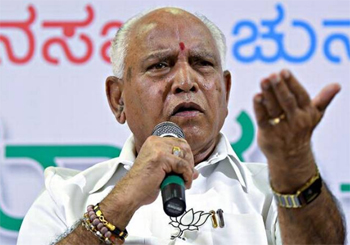 Yeddyurappa, on Sunday, said as many as 20 Congress MLAs were ready to switch to the BJP and that the party would also win the bypolls in Kundgol and Chincholi assembly seats. However, barely 24 hours later, Yeddyurappa told reporters in Hubballi: “All I said was anything can happen to the coalition government, given the internal tussle between coalition partners Congress and JD(S).”

Reiterating that the coalition partners will not cross the double-digit mark in the Lok Sabha elections, Yeddyurappa said coalition candidates would bite the dust in Mandya, Tumakuru, Kolar and even Kalaburagi where Mallikarjun Kharge, Congress leader in the Lok Sabha, is contesting.

Referring to JD(S) state president AH Vishwanath's outburst against former chief minister Siddaramaiah, Yeddyurappa claimed it was Kumaraswamy who is fuelling the spat. “Vishwanath is only expressing Kumaraswamy's feelings about Siddaramaiah,” he said.

Later, at an election rally in Chincholi, Yeddyurappa said he will not allow the next legislative session to run if the government does not completely waive farm loans as promised. “Kumaraswamy has betrayed farmers by falsely promising to waive their loans. It's been one year now and not many farmers have benefited from the scheme," he said.

Make sense of the 2019 Lok Sabha Elections and results on May 23 with The Times of India. Follow TOI to track latest news, live updates, news analysis and cutting-edge data analytics. Track live Election Results, the big trends and fastest news updates from each of India's 543 Lok Sabha constituencies on the counting day with India's largest news network.

Did not say government will fall: Yeddyurappa