Did Siddaramaiah urge Congress high command to pull out of coalition in Karnataka?

Bengaluru, Jun 20: Congress Legislature Party leader Siddaramaiah and senior MLA HK Patil, who have been in Delhi since Tuesday, have reportedly suggested the party high command to scrap the alliance with the JD(S), claiming that it is doing the Congress more harm than good. 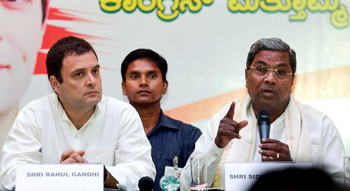 According to a source, Siddaramaih told Rahul that the party would have won more seats if it had faced the elections alone and also pointed out the futility of its alliance with the JD(S). “The sooner we take a call on ties with the JD(S), the better for the Congress’ future in Karnataka,” Siddaramaiah reportedly told the high command.

The former CM also explained to Rahul how the JD(S) has been gaining grounds at the expense of the Congress and that party workers are feeling neglected in the coalition set up. “Despite concerted efforts by the leadership of both parties, there is a lack of cohesion on the ground between the parties,” Siddaramaiah reportedly told Rahul.

Patil was said to be more categorical in his views on ties with the JD(S). He is said to have told the party high command to severe ties at the earliest. Patil was summoned by the high command following his outburst against the state government over the JSW Steel land deal and the handling of IMA Group scam. “The JSW Steel land deal also came up for discussion during the meeting,” a source said.

Did Siddaramaiah urge Congress high command to pull out of coalition in Karnataka?