New Delhi, Feb 17: The Congress high command is likely to announce the party’s key troubleshooter in Karnataka, DK Shivakumar as the next state unit president with MB Patil as the working president, according to party leaders who spoke on condition of anonymity, in what could be a delicate balancing act between competing caste claims in the state.. 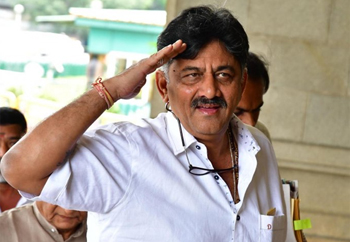 The KPCC presidentship has been vacant ever since the incumbent Dinesh Gundu Rao resigned following the defeat in the bypolls, in which the ruling Bhartiya Janata Party (BJP) won 12 of the 15 seats, ensuring a majority for itself in the state assembly.

The state leadership issue became contentious following that, with Shivakumar, a Vokkaliga, lobbying to ensure that his role as party’s main go-to man during difficult times be rewarded, the leaders cited above said. Patil, a former home minister and a Lingayat leader, was the favoured choice of Siddaramaiah, they added.

A former minister in the Siddaramiah cabinet told HT on condition of anonymity the appointment was now “just a formality”.

“How long could the current uncertainty continue? Shivakumar is a go-getter who can also help generate funds for the party. For instance, on the Bidar school sedition issue, we were late and started an agitation only after the accused got bail. With Shivakumar at the helm, we will be more aggressive and able to put the BJP government on a mat by highlighting all their omissions and commissions,” the former minister added.

The decision to appoint Shivakumar -- a seven-term MLA who served in the cabinets of former CMs S Bangarappa, SM Krishna, Siddaramiah and HD Kumaraswamy -- is likely to be a controversial one. He faces ongoing income tax and Enforcement Directorate (ED) probes, is currently on bail after being jailed by the ED in a money laundering case. He

In his 2018 poll affidavit, Shivakumar declared assets worth Rs 840 crore, making him one of the richest politicians in the state. His brother DK Suresh is a two term parliamentarian and is the sitting MP from the Bangalore Rural constituency.

Shivakumar’s latest move to build the world’s largest Christ statue in his constituency in Kanakapura has also come in for severe attack from Sangh Parivar outfits, who claim the land he donated was government-owned and illegally usurped by him.

Political analyst Manjunath said that Shivakumar, if appointed, is likely to inject a great degree of dynamism into the functioning of the party.

“He sees himself as a future Chief Minister and is very ambitious. If the appointments are confirmed, it will only vindicate the fact that the party high command has tried to balance caste interests by having a Vokkilga, a Lingayat and a Kuruba – the three leading castes in the state - heading different parts of the party. Also since the BJP is making a concerted effort to break into the Vokkaliga votebank, nominating Shivakumar would be a smart move to consolidate the community behind the party,” he said.