Mangaluru, May 16: A prime accused in Periya twin murder case who had managed to escape abroad has been nabbed by the police on Thursday morning from Mangaluru International Airport. 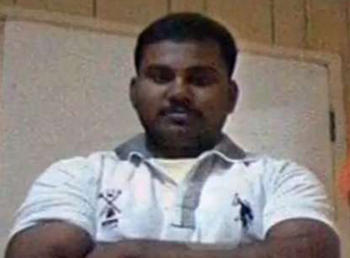 A Subeesh, a native of Pakkam, had fled from his place a few days after the murder of two Youth Congress workers - Sarath Lal and Kripesh - at Periye in Kasaragod district of Kerala on February 17. The police had sought Interpol’s help to catch him.

Subeesh, who was working as a porter in Uduma area, was at his native place in the first few days after the murder was committed. When the investigation intensified, he escaped from the area. As the police realised he flew abroad, they started making plans to nab him.

On Thursday morning Subeesh arrived at Mangaluru airport and the police arrested him. He was part of the murder gang. Police had started attempts to seek help of the Interpol to find Subeesh from the foreign country.

With Subeesh’s arrest, all main accused in the case are in custody, it is learnt. All in the list of accused have been arrested. After Subeesh was arrested, the number of arrested persons touched 14.