Bengaluru/Belagavi, Dec 5: Sagar Patil, 37, the only son of former MLA and four-time Belagavi city mayor Sambhaji Patil , fell to death from the door of a moving train in Srirampura, near Malleswaram, minutes after it left the KSR (Bengaluru City) railway station on Monday night. 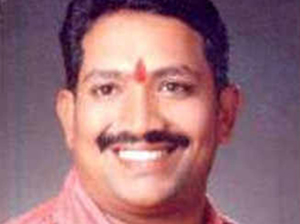 Bheemashankar S Gule d, superintendent of police (railways) said the incident occurred when Patil was returning to Belagavi after attending a court hearing in Bengaluru by Rani Chennamma Express. The train left the KSR (Bengaluru City) railway station around 9.15pm. Sagar reportedly went to the toilet and is suspected to have been standing near the door when he fell as the train was moving on a bridge. Sagar fell 25ft down, hit the ground and died instantly. Passersby, who noticed the incident, alerted the jurisdictional Srirampura police station around 9.30pm.

Police rushed to the spot and recovered a mobile phone broken into two pieces from near the body. They assembled the phone, traced the number of the dead man’s parents and informed them of the tragedy. They also alerted railway police about the incident. The body was later shifted to Victoria Hospital and handed over to the family after postmortem past midnight. It was then immediately shifted to Belagavi.

“We have registered a case of unnatural death. There were no allegations made by his parents,” city railway police confirmed. Belagavi deputy mayor Madhushri Pujari, MES leaders Appasaheb Pujari and Sanjay Sateri, and councillor Sanjay Shinde were accompanying Sagar. As it was time for dinner, Sagar went to freshen up but didn’t return for a long time. His companions searched for him, but in vain. Later, they called on his cellphone, by which time police had reassembled it and alerted Sagar’s parents.

Political leaders cutting across party lines, including MLA Satish Jarkiholi, visited the residence of Patil and met the bereaved parents. Sagar was cremated at Shahapur crematorium on Tuesday evening.