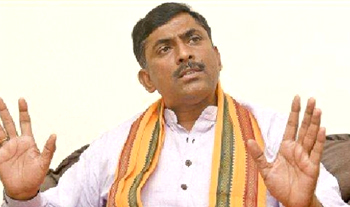 He said the BJP was confident that the Congress-JDS government, led by Chief Minister H D Kumaraswamy, would lose the trust vote in the Legislative Assembly on Thursday.

"You can expect," Rao told PTI when asked if a BJP government is expected to be in place in Karnataka next week.

"We will not shy away from our responsibility," he added.

The coalition government is in "clear minority" and should go, Rao said.

The Supreme Court earlier on Wednesday directed that the 15 rebel Congress and JD(S) MLAs "ought not" to be compelled to take part in the proceedings of the Assembly, which is slated to decide a confidence motion moved by the state government on Thursday.

It further said Assembly Speaker K R Ramesh Kumar was free to decide on the resignations of the rebel legislators within such time-frame as deemed appropriate by him.

Welcoming the apex court's direction, Rao said the speaker cannot be "arbitrary" and should take a decision within a reasonable time-frame.

"Since now he (the speaker) has gone beyond a point, at least at this point, there should not be a compelling whip to participate.

"So, in a way, the Supreme Court while accepting the speaker's domain has created a situation where these MLAs should not be compelled to attend the trust vote. So, whip should not be the factor," he said.

"So, the Supreme Court in a way has given protection to 15 MLAs while exercising their right. Now, in my view, disqualification (of rebel MLAs) is not possible," Rao contended.

"The way Supreme Court has given the direction, it is in a way, a guideline for the speaker for the future," he added.