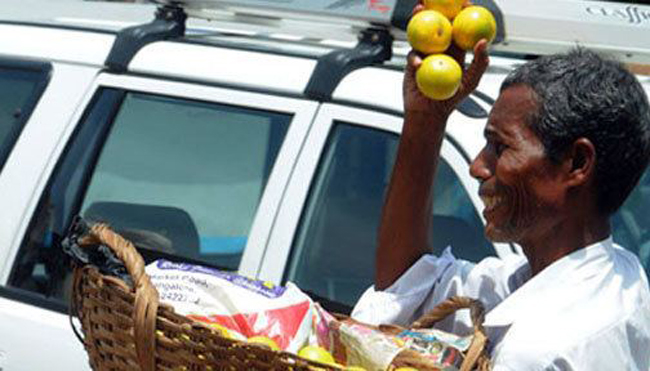 Mangaluru, Jan 25: Orange vendor Harekala Hajabba, popularly known as 'Akshara Santha' (the saint of alphabets), who went on to build a school at Newpadpu village on the city’s outskirts in 1999 is among this year’s Padma Shri awardees.

When Hajabba received the call on being nominated for the award, he was standing in a queue to buy rations.

As he is not fluent in Hindi, Hajabba handed over the phone to an auto driver, who conveyed the news that the Padma Shri award will be conferred on him.

The unlettered achiever set up a primary school from his meagre savings of Rs 150 per day,  selling oranges in Mangaluru.

“The first time I felt bad for being an illiterate was when a foreigner enquired about the price of oranges in English. I did not know what he meant. So, I decided to start a school in my village,” Hajabba had said during a felicitation programme.

When Hajabba decided to start a school, he did not get any support. He started the school with 28 children.

The school today has been upgraded to a composite high school and is catering to the educational needs of hundreds of children in and around Newpadpu.

He ran from pillar to post in the Zilla Panchayat to make his dream come true. All cash awards he had received went into building the school. The United Christians Association, moved by the sight of his dilapidated house, built a 760-square-foot house costing Rs 15 lakh for him.

Hajabba’s life was prescribed for the syllabus of three universities - Davangere, Kuvempu and Mangalore. His success story is also included in a Tulu textbook.

Hajabba, when contacted, said he could not believe his ears when told about the award.

The frail vendor, in his 60s, humbly declared that he could achieve all this because of the support of all. Hajabba now dreams of upgrading the school into a full-fledged PU college.

A big Salute to him!

May God help him.