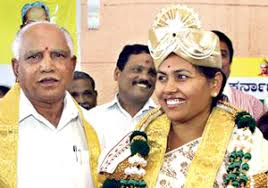 Bengaluru, Oct 7: Senior JD(S) leader H D Kumaraswamy on Monday slammed the chief minister B S Yediyurappa-led BJP government in Karnataka for its failure to meet the expectations of farmers, who lost their land and livelihood in the floods.

Kumaraswamy specifically mentioned the distressed farmers of Chikkamagaluru district, which saw the devastating floods damaging crops in huge swaths of land and suicide by two farmers who were unable to bear the loss.

He flayed the Udupi-Chikkamagaluru BJP MP Shobha Karandlaje for not standing with the peasants. "Thousands of families are in distress in Chikkamagaluru due to floods. Farmers are committing suicide as they were not getting any relief from the government," Kumaraswamy tweeted. "The Chikkamagaluru MP who should come in support of the farmers is missing from the area, which shows her concerns for farmers," he alleged.

Hitting back at the former Chief Minister, Karandlaje said, "Kumaraswamy has demonstrated what he is. If he says that I don't know the sufferings of farmers then he must be knowing it well because he grew rich by growing potatoes." Defending the Centre, she said the Union government has long term plans while releasing funds. The central and state grants would be utilised in the best possible manner, she told reporters in Mysuru.

Chikkamagaluru district made headlines after two farmers Chandre Gowda and Channappa Gowda committed suicide recently. They were devastated after the damage to their agriculture land and crops in the ravaging flood last month as well as in the last four to five days.

Later speaking to reporters, Kumaraswamy alleged large scale corruption was taking place in the distribution of relief money to the flood affected people. "People told me that a racket is operating, which takes a 'cut' of Rs 3,000 to Rs 4,000 from Rs 10,000 given for flood relief to the victims. These are only a few instances. Such phenomenon is not restricted to Mudigere. We are hearing of similar complaints from elsewhere," he claimed.

The former chief minister opined that the Central grant of Rs 1,200 crore was final and no other instalment would be on the way. Elaborating further, Kumaraswamy said the Centre keeps aside Rs 35,000 crore as a contingency fund for the entire country and it would not be able to release more than Rs 1,200 crore to the State.

The Centre had released Rs 1,200 crore flood relief as against the demand of Rs 35,000 crore by the State government.

Chief Minister B S Yediyurappa had said that this was only the first instalment, while a second instalment was on the way.

However, Kumaraswamy did not seem to be convinced with Yediyurappa's statement. He said, "In the present circumstances, I don't think the Centre would release more funds." The state should utilise the available funds from its own coffer, which he felt has adequate reserves due to good tax collection.