Belagavi, Dec 2: Former chief minister H D Kumaraswamy asked the state government to handover the honeytrap case to the CBI for inquiry as he too has heard some of the audio’s and the voices appear to be familiar with being like a ‘sahukar’. 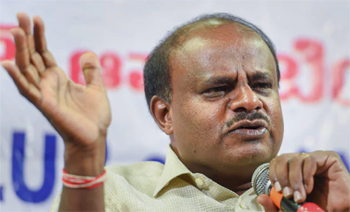 Speaking to reporters at the airport here on Monday, Kumaraswamy said, an inquiry by CBI in the honeytrap was suitable to unearth the truth, hence it should be handed over to it for investigations.

He said, he campaigned for the JD(S) candidates for two-days in Gokak and Kagwad. Gokak candidate Ashok Pujari could win from the constituency as people are aware of the political situation and needs. Political developments in Maharashtra will not have any impact on the voting here as the situation in both the states was different.

Post-December 9, after the bye-election results are announced, the state could witness political changes. We have to wait and see, he added.

Kumaraswamy said, ethics and morals were not left in politics and they have been replaced by opportunism for want of power.