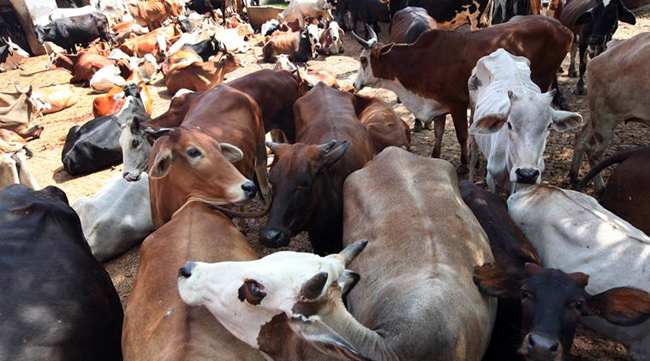 Ahmedabad, Apr 12: The Gujarat High Court has quashed three notifications of the state government aimed at stopping export of livestock from Tuna Port, terming it "colourable exercise of powers" to do something which cannot be done directly.

Several livestock exporters had knocked the high court's doors after the state government issued various orders in December 2018 which in effect banned export of animals from Tuna in Kutch.

Chief Minister Vijay Rupani had announced in December that his government will not allow export of animals from the port, noted the high court.

On the same day the Agriculture Department issued a notification under the Gujarat Essential Commodities and Cattle (Control) Act, prohibiting movement of cattle from outside into any drought-affected area. Kutch was already declared as drought-affected region then.

Then the Director of Animal Husbandry informed the Commissioner of Customs that the state government has decided to withdraw the services provided for health check-up of animals to be exported.

"He further urged the Commissioner of Customs not to allow export of live animals from Tuna...until specified (check-up) facility is established", the HC noted.

On the same day, the Home Department directed Kutch police to set up check posts to keep a watch on transportation of animals, the high court said.

"What cannot be done directly by the State Government is sought to be done indirectly under the guise of exercise of powers under section 4(1)(b) of the (Cattle Protection) Act... notification, therefore, clearly has been issued in colourable exercise of powers and deserves to be struck down", it said.

The intention was to prohibit export "which is otherwise not a state subject", the judges opined.

Though the state government requested the court to stay its order so that it could move the Supreme Court, no stay was granted.