How these Karkala siblings fought poverty, disability to clear PU Board exams 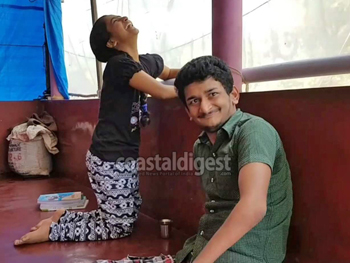 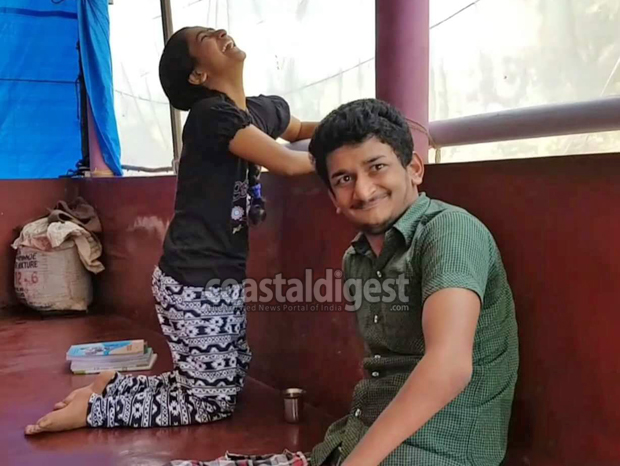 Fighting the odds of disability and poverty, Prajwal and Pratheeksha, the siblings from Borgalgudde in Nitte village of Karkala in Udupi district on April 30 cleared the Pre-University exam. While the 22-year-old Prajwal and 19-year-old Pratheeksha secured 51% and 49% respectively in the arts stream, they claimed disappointment that they could not secure 70 per cent similar to their matriculation results.

"They have passed their test that is a big achievement for all of us. First class, second class does not matter, my children cleared the test, they can pursuit their dreams now," Shekar Salian, their father said with a sense of relief.

For over two-days now, Prajwal and Pratheeksha who are generally reserved and shy are quite overwhelmed by the repeated calls and congratulatory messages from relatives and friends. The siblings who since childhood are unable to walk due to a genetic disorder generally stay at home and have limited interaction with outsiders. So you see, it takes more time for them to interact with people, their 47-year old father adds. The duo simply shy away while being talked for interview by this reporter.

For these home-tutored pupils, it was not just the 'test' that came with challenges, but the whole concept of adapting to the examination environment. So the siblings claimed that they were intimidated by the presence of so many other children, besides invigilation squad, and stringent environment.

Prajwal and Pratheeksha had to discontinue their regular schooling from 8th standard, as their parents could not arrange for their transport. "We could not afford those things. Few years ago I had to quit my job due to health and my wife Jyothi Salian rolls beedis. Since our financial condition is a bit tough, we are trying to make ends meet," the 47-year old Salian said. For the last several years, these students are being taught at home by teachers Ganesh, Akshatha and Rajani for seven-hours a day.

While Ganesh taught Economics, English and Political Science, Akshata and Rajani taught Kannada, History and other subjects. The teachers give prominence to writing than the oral.

This year at the PU board, things took a critical turn for Prajwal and Pratheeksha, after the examination department disallowed Prajwal and Pratheeksha to be accompanied by the ‘Assistance writers’ of their choice. "We don't blame the system. But during the matriculation their regular tutors were allowed to write for them. But this time the PU board was stringent with condition. Our plea that the kids have communication issue with new people, especially Prajwal - who stammers, did not gain any us favor," Salian said. Moreover, the PU board had laid an additional rider that the 'assistants' must be at-least a year junior in their academics and they cannot be from Arts background.

The family had a tough time looking for the right candidates, as most of the students had just finished their own exam and were fatigued. The parents wandered to several colleges and their relatives but their requests were turned-down or faced a dead-end.

Highlighting the plight of the family Suvarna News 24/7, a Kannada TV channel, even relayed a public appeal, even local government represented the family but the Board did not change the rules. Finally, two students a boy and a Muslim girl from the neighbourhood agreed. "To avoid confusion, we initially told the family that besides giving them best wishes we won’t be able to financially compensate them," Jyothi says.

For over a week, the children about an hour spend an hour each with Prajwal and Pratheeksha to understand their language and expression. Ultimately, things sailed smoothly for the candidates in the test

While the children will continue to pursuit degree education in Arts stream, the family is looking for physiotherapy and other treatment to enable them to live their life independently. "Both our children are highly intelligent and we are certain that they can do something in life. But we do not want them to be confined to a wheel-chair for the rest of their life, for which we are making our best effort.

In a heart-warming gesture the local community in Borgalgudde have raised a sum of Rs 11 lakh through Samaritans and friends from social media for the future of these children. "Most of them tell me that I should enroll them in computer courses, so that they can be self-sustainable. Let’s see, what my kids want," Jyothi says.

How these Karkala siblings fought poverty, disability to clear PU Board exams

Well Done Really Great Thousands of Congratulations Keep it up

God bless you and guide you