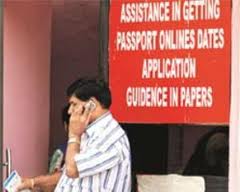 New Delhi, June 21: Shaken by the rising public anger against messy implementation of the new internet-based passport application system, the ministry of external affairs on Wednesday put in place a number of measures that are expected to make it easier for people to apply for passports. Some of these measures will come into effect immediately and a few more are likely to be announced on Friday.

Among the steps taken right away is a hike in the number of daily online appointments by 500. This is expected to ease up some pressure on applicants. Right now, the window for making online applications is exceedingly short. The hike by 500 is expected to make this window a little larger. What's more, the passport office will now work also on Saturdays in Delhi. In other words, 12,000 more passport applications will be dealt with every month.

These measures, as well as some more, were taken in the wake of The Times of India highlighting the pain of passport applicants in a series of reports. "We have treated the matter with utmost concern after the TOI reports. We will be releasing more appointment slots every day, little by little, and in 15 days you will see a definite impact," said chief passport officer (CPO) and joint secretary in the MEA, Muktesh Kumar Pardeshi.

The MEA has said that all Passport Seva Kendras (PSKs) will be increasing their capacity to deal with applicants over the next fortnight. The ministry also said that family tokens will be issued to allow family members to seek appointments together. In order to tackle touts and recalcitrant babus, the ministry said the online process would be made more transparent and anyone asking for money to play the system would face strict action.

Ministry officials promised that the website would be revisited to ensure that all requirement of documents are clearly mentioned. This will ensure that there will be no suprises or whimsical demands for documents. Together with the stick, the ministry is expected to shortly announce the carrot - a monetary incentive policy for those clearing a higher number of applications.

The ministry has decided to make one passport centre dedicated for passports under the Tatkal scheme. Right now because of the mess, Tatkal passport application do not get any real advantage despite paying an additional Rs 2,500.

Starting Thursday, the Bhikaji Cama Place PSK will accommodate 500 more online appointments, taking the total number of booking slots allotted to Delhi to 2,000. Pardeshi claimed that PSKs in Delhi have been witnessing a trend of roughly 30% online applicants not showing up on the appointed day. Calling it a "sheer waste of resource", Pardeshi said the MEA has factored in this absenteeism and will release more slots accordingly.

A special token intended to serve families better is also in the pipeline. TOI readers had complained that they couldn't book online appointments for their families on the same day as theirs. This new token, Pardeshi said, would solve this problem.

The ambiguities in the passport application process have been another concern. Both MEA and Tata Consultancy Services have claimed that the new system is "absolutely transparent" and "smooth". When TOI investigated the issue, it found that information pertaining to the mandatory documents displayed on the portal, www.passportindia.gov.in, was not in consonance with the ones asked by the PSKs. When PSKs were asked the reason, they said they reserved the right to demand additional documents.

This will not happen anymore, said the CPO. "We are working on our portal and will soon upload an advisory for applicants. The process will be explained in detail and hopefully, nobody will face any inconvenience at the PSKs in terms of 'surprise demands'," Pardeshi said.

But what about those people who fail to book appointments online and have to seek help from agents, who charge hefty amounts for bookings? "We are issuing instructions to all passport offices to lodge FIRs against anyone found claiming to arrange for multiple bookings in exchange for money. We are also considering an idea to rope in the postal department into the process. Post offices can book online appointments for a token fee and keep agents out of the picture completely," said Basant K Gupta, additional secretary, consular passport & visa division, MEA.

Tokens to allow entire family to turn up on same day for appointment.

Passport offices to lodge FIRs against those promising multiple bookings for fee.

Website to list details of all mandatory documents. PSKs can't turn away applicants by saying they reserve right to demand additional papers.

All passport offices to work on Saturdays too.

We have treated the matter with utmost concern after the TOI reports. In 15 days you will see a definite impact

It's good that the authorities are responding to media reports on the problems being faced by passport applicants. It's hoped that what's been announced will actually be done right away. We want a transparent and an efficient system for issuing passports. And an Internet-based system can achieve that. Transparency will, of course, mean that certain vested interests - from touts to corrupt passport office babus - will be badly hit. And these interests are trying to derail a more transparent system. There must be a firm message from the top that the system will be cleaned up and anyone found to be subverting it will be dealt with firmly.