'Internal fight' erupts in Congress ahead of Karnataka by-polls 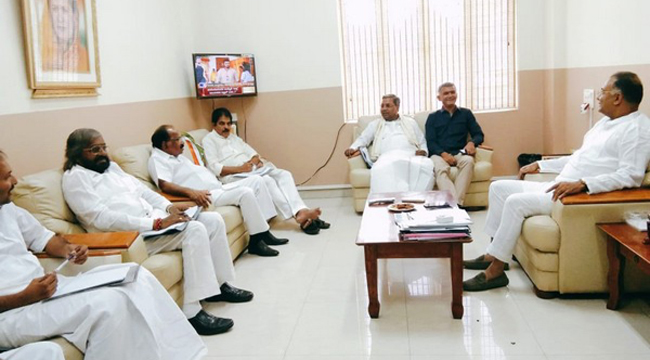 Bengaluru, Oct 15: The Congress party is still indulging in an internal fight to finalise candidates for all 15 Assembly constituencies in the state, where by-elections will be held on December 5 later this year, sources said.

To finalize the names of candidates, a meeting was held at Congress office here today. Among those present were Siddaramaiah, Dinesh Gundu Rao, KC Venugopal, Veerappa Moily and Eshwara Khandre.

On the other side, congress leaders in Karnataka are waiting for BJP's final candidates list to choose their representatives, sources added.

Sources have further shared that the Congress party is waiting for those leaders who will stand against the BJP after the party will give tickets to rebel MLAs of Congress and JD(S).

Some BJP leaders are likely to join Congress and JD(S), sources shared.

Karnataka Chief Minister B S Yediyurappa had on September 30 said that the 15 MLAs, who tendered their resignations and aspired to contest Assembly by-polls from the BJP, will get tickets.

"The Election Commission has confirmed poll dates now. Those MLAs who have tendered resignations and want to contest from the BJP party will get tickets," Yediyurappa said.

Earlier, the by-elections in Karnataka were scheduled to be held on October 21 in 15 constituencies that were vacated by rebel MLAs of Congress and JD(S).

However, the election date was later shifted to December 5 by the Election Commission.

'Internal fight' erupts in Congress ahead of Karnataka by-polls