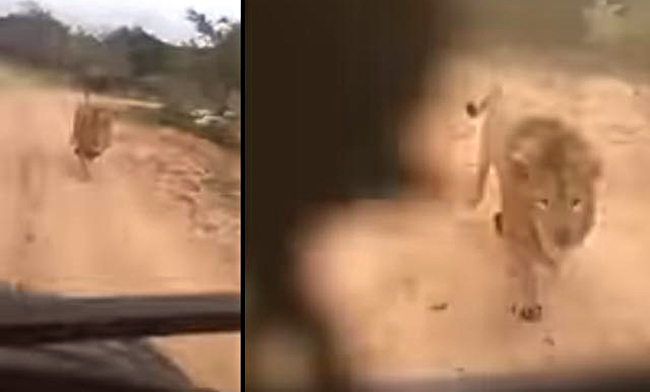 Bellari, Oct 14: A video clip doing the rounds on social media of a lion chasing visitors in a zoo safari in Karnataka's Ballari district was taken 45 days ago, an official said on Sunday.

"It's a non-event, which occurred 45 days ago in late August during our zoo safari. Nothing untoward happened, as chase by lions and tigers in their territory is common," Ballari zoo Executive Director Sonal Varshi said.

The one-minute video of the six-year-old lion, Keshri, chasing a speeding vehicle carrying a bunch of excited visitors went viral on social media, including YouTube, WhatsApp and Facebook, on Saturday after it was uploaded online anonymously.

The video was also aired by news channels. It is similar to another video from Kerala which was shared widely in July showing a tiger chasing two persons on a motorcycle.

The sprawling zoo, named after former Prime Minister Atal Bihari Vajpayee, is located in the mining rich town of Ballari in the northern part of the state.

"The lion got worked up when the driver took the jeep closer to it and raised the throttle, which provoked it to charge and chase it at top speed," recalled Varshi, a 2011 batch Indian Forest Service (IFS) officer.

As a safety measure for the visitors in the big cats' territory, vehicles on safari trips are grilled and meshed to prevent any attack on them by lions or tigers.

Spread across 350 acres, the safari park houses eight big cats, including four tigers and four lions. There aren't any cubs yet, as the two males and two females each have not been allowed to mate till now.

"Keshri was a new entrant in the zoo and was released in the protected area to settle down. It has accustomed to vehicles and visitors now," Varshi said.

The lions were relocated to Ballari from Bannerghatta zoo in Bengaluru while the tigers were brought from Mysuru zoo, about 150 km from here. Though the zoo is yet to be formally inaugurated, the safari was opened for visitors in July.