Mangaluru, Feb 17: Kambala superstar Shrinivas Gowda, who is drawing comparisons to ace sprinter Usain Bolt, has reportedly refused to take part in athletics trials with the Sports Authority of India. 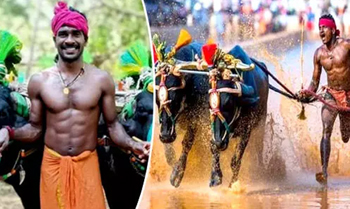 28-year-old Gowda, who hails from Moodbidri in Dakshina Kannada, was celebrated as a potential Olympian after a clip of his race went viral, amid claims that he had done 100m in 9.55 seconds, against Bolt's record of 9.58. He has so far won 32 medals in 11 kambala events this season.

Union sports minister Kiren Rijiju and SAI said Gowda would appear for trials at SAI's Bengaluru centre on Monday. The government "will do everything to identify sporting talents", Rijiju had tweeted.

"I will meet the Chief Minister. I am keen on continuing in kambala," Gowda said. Asked about the clamour for a crossover into athletics, he said, "For the time being I have no plans to appear for SAI trials. I am busy with the Kambala season and will consider meeting them following that and after consulting my well-wishers."