Kannadigas protest against Union Minister for taking his oath in English 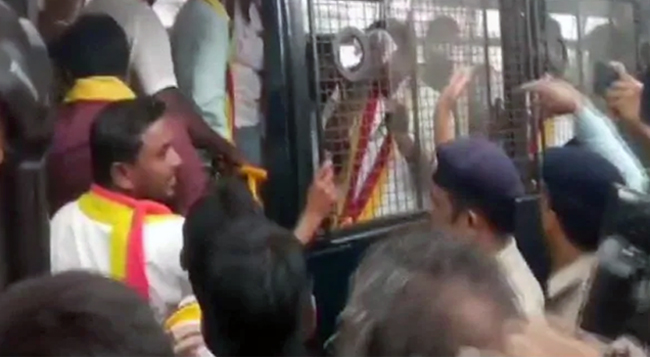 Belagavi, Jun 19: Karnataka Police on Wednesday detained members of Karnataka Rakshana Vedike, who were protesting against Union Minister of State in the Ministry of Railways, Suresh Angadi, for taking oath in English as a member of the Lok Sabha.

Suresh Angadi, who has won for the fourth time consecutively from Belagavi, having won for the first time in 2004.

Karnataka Rakshan Vedike or Karnataka Defence forum is a pro-Kannada organization, known for their activism in the interest of Kannada-speaking community in issues like Belgaum border issue, Krishna river water sharing, Cauvery water dispute, Hogenakkal, Mahadai project and so on.

Kannadigas protest against Union Minister for taking his oath in English