Bengaluru, Jul 17: A resurgent Bharatiya Janata Party's Karnataka unit on Thursday hailed the Supreme Court verdict on the joint petitions of the Congress-JD(S) rebel legislators for directing the assembly speaker to decide on their resignations and allowing them to skip the session on Thursday for the trust vote, to be moved by chief minister HD Kumaraswamy. 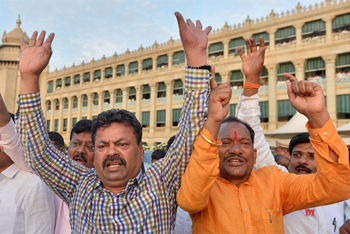 "We welcome the verdict, which is a victory for democracy and the Constitution. It is better Kumaraswamy resigns forthwith than seek a trust vote in the assembly when his coalition government has no numbers to prove majority," BJP's state unit president BS Yeddyurappa told reporters in Bengaluru.

In view of the apex court's order leaving the choice of attending the assembly to the rebels and that they cannot be compelled to participate in the trust vote, Yeddyurappa said even if the ruling allies (Congress and JD-S) issue a whip to be present in the house and vote in favour of the confidence motion, it will not apply to the 15 rebels who sought the top court's permission to abstain.

"The whip won't apply to the 15 MLAs who have resigned. They can't be coerced into attending the assembly session," asserted Yeddyurappa.

In the event that the 15 rebel lawmakers, including 12 of the Congress and 3 of the JD-S, abstain from the assembly as declared by them on Wednesday in Mumbai after the apex court's interim order, the strength of the house will come down to 209 from 224 elected members.

If Congress rebel legislator R Ramalinga Reddy, who resigned on July 6, also skips the session, the house strength will reduce further to 208, with 105 as the new halfway mark for a simple majority.

With the ruling combine's strength reduced to 101, including one of the BSP as against 107 of the BJP with the support of two Independents, the motion of confidence is bound to be defeated if Kumaraswamy goes for a floor test in the House.

"As the coalition government is reduced to minority and lost the mandate of 18 legislators, including 16 rebels and two Independents, Kumaraswamy has no moral right to continue after the Supreme Court's landmark verdict," reiterated Yeddyurappa.

Echoing Yeddyurappa's views, BJP's former chief minister Jagadish Shettar said that the shaky coalition government was causing anarchy in the state by clinging to power even after 16 of its legislators resigned.