If you want me to continue as DyCM then vote for disqualified MLA: Laxman Savadi to voters

Bengaluru, Dec 2: A head of the by-polls to 15 assembly constituencies, Karnataka deputy chief minister Laxman Savadi on Sunday pleaded the voters to vote in favour of BJP candidate Shrimant Patil, who is contesting from Kagwad. 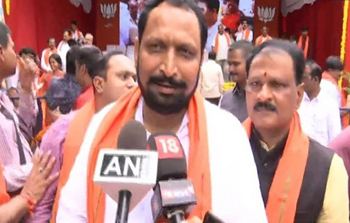 Patil, who was Congress MLA and then joined BJP after his disqualification, is in the fray against Congress leader Gajanana Mangasuli.

"If you want me to continue as deputy chief minister then vote for Srimanth Patil," Savadi said at an election campaign in Athani.

Meanwhile, Karnataka Chief Minister BS Yediyurappa too came out in support of his party leader during his visit to Anathpura village at Athani constituency.

By-polls to the 15 assembly seats in Karnataka are scheduled to be held on December 5 from 7 am to 6 pm. The by-elections would take place in Athani, Kagwad, Gokak, Yellapura, KR Pura, Yashwanthapura, Hirekerur, Ranebennur, Vijayanagara, Chikkaballapura, Hoskote, Mahalakshmi Layout, Shivajinagar, KR Pete and Hunsu.

The counting of votes would take place on December 9.

If you want me to continue as DyCM then vote for disqualified MLA: Laxman Savadi to voters

If he is a disqualified MLA we will choose other MLA