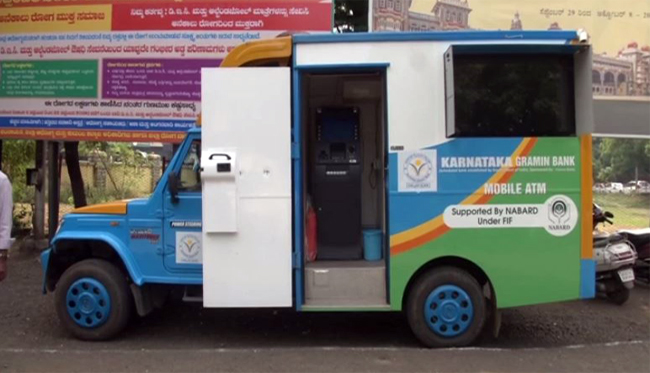 Kalaburagi, Nov 8: In a move to boost digitisation in rural areas, the Karnataka Gramin Bank (KGB) has launched 'mobile ATMs' in Kalaburagi among several other districts in the state.

The special vehicle includes an ATM and a screen to show videos of different banking schemes.

Speaking to ANI, Girish Hebbar, regional manager of KGB, said: "Our aim is to create awareness among farmers regarding bank schemes and how to use digital ATMs to repay their loans promptly."

He further stated that the project was assisted by a Financial Inclusion Fund by the National Bank of Agriculture and Rural Development.

The mobile ATMs will go to the doorsteps of the farmers and make them aware of the banking schemes and digital operating systems.

A local, Santosh, expressed appreciation over the initiative, stating that steps like this should be taken up by other national banks as well.

"This is a very good initiative, as some of our villages do not have the facility of ATMs, and going to another village to access an ATM can be a very tedious task. Furthermore, proper awareness of bank schemes will help the farmers a lot," he said.

A bank official would be present in the van, who will provide information regarding the digital operating systems and schemes.

The vehicles have already covered 68 districts.