Bengaluru, Jan 21: A private hospital in Bengaluru, the capital of Karnataka, on Tuesday claimed that it has successfully performed a live liver transplant on a Jehovah's Witness from Nigeria, by not using blood or blood products, in order to protect the patient's religious beliefs. 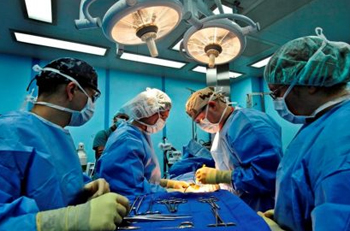 It is said that Jehovah's Witnesses are followers of a Christian faith that prohibits the use of blood or blood products during their treatment. Gehojadak (37), a Jehovah's Witness follower, had developed decompensated liver disease and visited more than three countries seeking treatment over the last four years but was turned away by most doctors due to the highly risky nature of surgery, Aster CMI Hospital said.

The surgery was challenging compared to a normal liver transplant because in order to protect the patient's religious beliefs, the medical team could not use blood or blood products (Fresh frozen plasma, Cryoprecipitate, Platelets etc), it said in a release, adding that very few such surgeries have been successfully conducted worldwide.

The patient's brother was the donor, the hospital said, adding, without a liver transplant, Gehojadak's chances of survival were less than 10 per cent over the next two years. A team of liver specialists from the Hospital thoroughly reviewed the patient's medical history before recommending a bloodless liver transplant and charted out a feasible pathway to make the surgery a success.

"This transplant was especially challenging as we did not have the safety net (of using blood) even if the patient's life was at risk due to their advance directive. We have performed other non-transplant liver surgeries in Jehovah's Witnesses and this gave us the confidence to take on Gehojadak's transplant," Dr Rajiv Lochan, Consultant Liver Transplant Surgeon, said.

The critical surgery took a 12-hour period to complete where two teams of specialists with close to 25 doctors including anaesthetists, intensivists worked in absolute sync with each other and Gehojadak finally received a life-saving liver transplant, the Hospital said. In a period of two weeks, the patient and his brother were fit enough to go home and were discharged from the hospital.

"Even if their haemoglobin levels dropped to life-threatening levels, the patients were clear that they would not accept a blood transfusion. Keeping the limitations in mind, the most effective treatment path was planned, and we spent close to two months preparing the patients for surgery," Arun V, Consultant Anesthesiologist said. The hospital arranged customised artificial products like synthetic drug molecules, to conduct a bloodless liver transplant, he added.