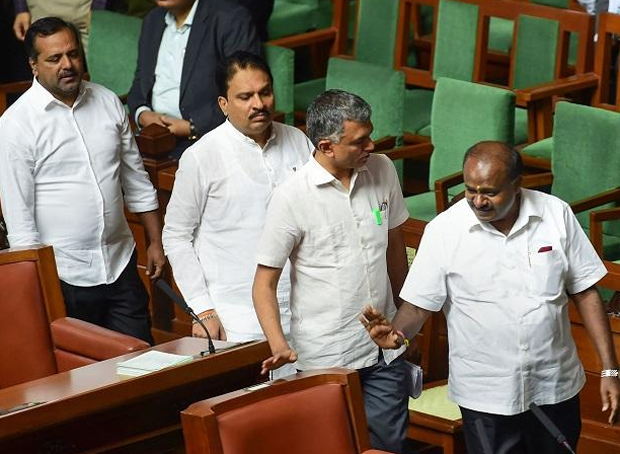 Bengaluru, Jul 22: With little wiggle room left ahead of Monday’s trust vote, the ruling JD (S)-Congress coalition went all out to reach out to the rebels — offering a Congresschief minister, tapping family members to pressure them, and CM HD Kumaraswamyappealing to “sit together and discuss all your problems and save this democratically elected government” — only to be met with a stubborn ‘no’.

Minutes after minister DK Shivakumar said JD(S) had “agreed to sacrifice the CM’s post” and that Congress could pick among him, Siddaramaiah or G Parameshwara, the rebels issued a statement saying they will not relent. “Our self-respect has been hurt. There’s no question of returning even if Siddaramaiah is made chief minister,” said Byrathi Basavaraj, once a staunch follower of the former CM.

State BJP chief BS Yeddyurappa said he was “100% confident” that “Monday will be the last day of the Kumaraswamy government”.

With coalition leaders having promised speaker KR Ramesh Kumar the vote will be concluded on Monday, the only variable appears to be the possible Supreme Court ruling on the Congress-JD(S) plea against the governor’s alleged interference and for clarification of the July 17 order allowing rebel MLAs to stay away from the vote. The two independents, now backing BJP, have moved Supreme Court, urging it to direct the government to conclude the trust vote by 5pm on Monday.

The JD(S)-Congress combine is short of the required number of 105, in the event of the rebels and two hospitalised Congress MLAs (Shrimanth Patil and B Nagendra) staying away. BSP chief Mayawati directed her lone party MLA to go with Kumaraswamy, but that will not help the coalition much.