Karnataka: Speaker summons rebel MLAs to meet him at his office on Tuesday

Bengaluru, Jul 22: Ahead of the floor test of Congress-JD(S) coalition government in Karnataka later today, speaker KR Ramesh Kumar has summoned rebel legislators to meet him at his office at 11am on Tuesday. 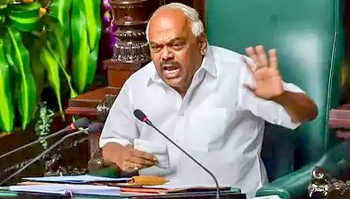 The notice has been issued over the petition by coalition leaders seeking disqualification of rebel MLAs.

In another development related to the deepening political crisis in Karnataka, the Supreme Court refused to give an early hearing to a plea filed by two independent legislators seeking a direction to conclude floor test in Assembly today.

The Congress-JD(S) government slumped into a minority earlier this month following the resignation of several dissident MLAs. Sixteen MLAs from the ruling coalition, including thirteen from Congress and three of JD(S), have resigned.

Security has been heightened around Vidhana Soudha ahead of the floor test of chief minister HD Kumaraswamy-led government.

Both the BJP and Congress leaders simultaneously held legislative party meetings in Bengaluru on Sunday.

In an attempt to persuade rebel MLAs, Karnataka Chief Minister HD Kumaraswamy had on Sunday appealed to them to attend the Assembly Session and explain how the BJP allegedly sabotaged democratic edifice and "destroyed its sanctity".

On Friday, the Assembly failed to meet two deadlines set by governor Vajubhai Valato complete the trust vote. After that, chief minister Kumaraswamy moved the Supreme Court challenging the governor's directive to the government saying it was in violation of the law.

On the same day, the Congress had also approached the top court seeking a clarification on its order allowing freedom to 15 rebel Karnataka MLAs from participation in the trial of strength on the floor of the assembly saying it whittles down the power of a political party to issue whips to its members under the anti-defection law.

The state assembly has 225 members, including one nominated MLA. The halfway mark in the 225-member assembly is 113.

Karnataka: Speaker summons rebel MLAs to meet him at his office on Tuesday