Bengaluru, Aug 24: Amidst growing dissidence among ministry aspirant BJP MLAs over Cabinet expansion in Karnataka, the party high top brass reportedly warned chief minister B S Yediyurappa to be ready for polls if he failed to settle portfolios. 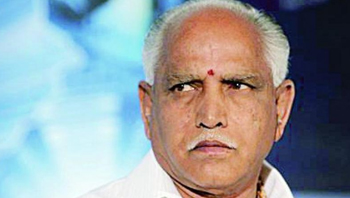 “The central leadership has made it clear to Yediyurappa that he should contain all dissident activities immediately and sort out the issues of allocation of portfolios. If the problems persist for long, it is better to dissolve the Assembly and go in for polls,” a senior party leader was quoted as saying by a local newspaper.

“Since polls to Maharashtra, Haryana and Jharkhand Assemblies are likely to be held in October-November, the party leaders said Karnataka too can go to polls at the same time if the state leaders failed to run the government smoothly,” said the leader.

Yediyurappa, who rushed to Delhi on Thursday hoping to meet BJP president Amit Shah and working president J P Nadda to discuss portfolio allocation, did not get an appointment with either of the leaders despite his repeated requests.

The BJP top brass is learnt to have communicated to the CM that all internal problems should be resolved at the state level without delay. Yediyurappa was also told that party leaders in Delhi, who are learnt to be upset with the bad press the BJP government in Karnataka is getting over the dissent after Cabinet expansion and delay in allocating portfolios, don’t like to hear complaints from the state unit.

Yediyurappa, his son B Y Vijayendra and newly sown in Minister C N Aswathnarayan, held a marathon discussion with some disqualified MLAs for the whole day on Friday at an undisclosed location.

At the meeting, it is learnt that eight rebel leaders, who were camping in Delhi for the past two days, refused to budge from their earlier demand for plum portfolios if they are inducted into the Cabinet after the Supreme Court overturns their disqualification.

Yediyurappa, who returned to Karnataka Bhavan in the evening after the meeting, left for Bengaluru without speaking to the media.

Rebel leaders were also learnt to have been upset with Yediyurappa for not taking them to meet Amit Shah. They also expressed their unhappiness over the induction of Laxman Savadi. The BJP is said to have assured 12 of the 17 disqualified MLAs that they will be inducted into the Cabinet if the Supreme Court decided in their favour.

Don't try to fool the Kannadiga's and don't waste our tax money for your one side EVM hack election result. Let the majority party to form government till next term.

If not agree then go for a fare and cLear non controversial ballot polling system.