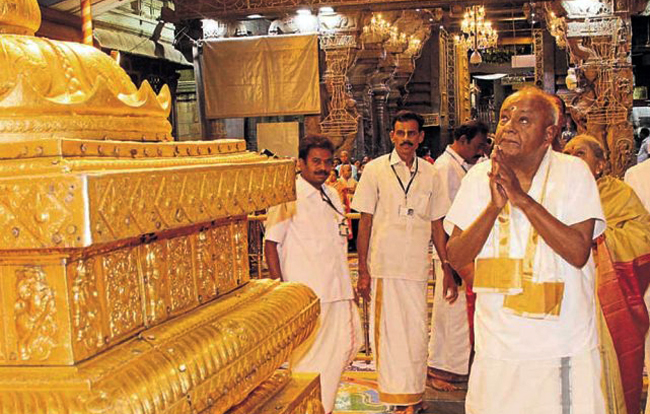 Gowda arrived here last evening along with his son and Karnataka Chief Minister H D Kumaraswamy and other family members. After offering prayers this morning, Gowda told reporters that he has been visiting the ancient shrine for the last 35 years on his birthday on May 18. "As a member of Lok Sabha in the complex political situation, what I can do I don't know.. we are with the Congress," he said in response to a question.

Kumaraswamy predicted that the Congress-JD(S) alliance in Karnataka would secure 18 to 19 seats (out of 28) in the Lok Sabha elections. To a query, he said there was no change in his party's stand and it would support the Congress in the formation of a new government at the Centre.

Asked about the Cauvery water sharing dispute between Karnataka and Tamil Naidu, Kumaraswamy avoided a direct reply and said he has come to Tirumala to pray to Lord Venkateswara for good rains this year. Later, they all left for Bengaluru.