Mangaluru: Underworld rowdy Asgar Ali who had fled to Dubai arrested after 12 years

Mangaluru, Jun 15: The Mangaluru city police have finally managed to arrest notorious underworld rowdy Asgar Ali, who had fled to Dubai in 2007 on a fake passport. 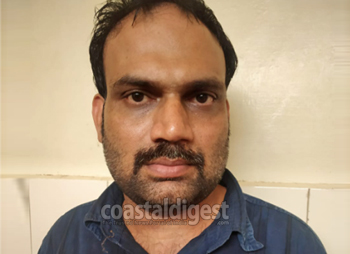 A native of Ullal on the outskirts of Mangaluru, Asgar is an accused in at least 9 criminal cases including 2 sensational murder cases.

He was picked up today from Uppala of Kasaragod district of Kerala by police team led by Kankanady police inspector Jagadeesh and PSI Shyamsundar based on credible information that he has come to India.

The police have also arrested two of Asgar’s alleged aides – Nawaz and Rasheed  –  who allegedly made fake passport for him.

City police chief Sandeep Patil said that Asgar was in Dubai, and along with Dawood and others hatched conspiracy to kill. Also, after murder, he arranged hideout for accused in Mumbai. He was involved in many cases along with Rashid Malabari and he also had made threat calls for ransom, Patil said.

Patil said that detailed interrogation will be done about his activities in Dubai. Further investigation is underway to learn as to how many such fake passports they are involved in and unearth the fake passport racket.

Mangaluru: Underworld rowdy Asgar Ali who had fled to Dubai arrested after 12 years