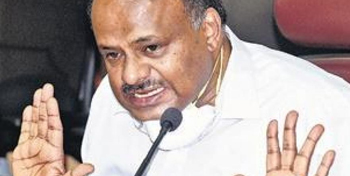 Bengaluru, May 27: Former Karnataka chief minister and JD-S leader HD Kumaraswamy on Wednesday said that the state government should withdraw the decision to name the Yelahanka bridge after Hindutva ideologue Vinayak Damodar Savarkar.

"The state government's decision to name the Yelahanka bridge after Savarkar is a disgrace to those who have struggled for the country's prosperity. This doesn't give a good name to the state government," Kumaraswamy tweeted.

"There are many great people who worked for the development of the country before and after independence. Their names could have been used for this bridge. Do other states name their bridges after our leaders? On behalf of the people of the state, I urge the state government to take a step back from this decision," he added.

The newly built Yelahanka bridge was named after Savarkar last year in a BBMP council meeting. Later it was sent to state government for approval. Tomorrow, the bridge is likely to be inaugurated for public use.