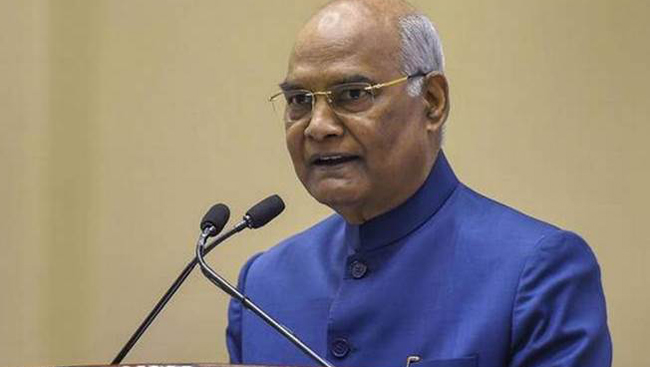 Bengaluru, Feb 22: President Ram Nath Kovind on Saturday said an ideal trade-off needs to be reached between new media -- which is fast and popular -- and traditional media which has developed skills to authenticate a news report, which is a costly operation.

Addressing the fourth edition of ‘the Huddle’ – the annual thought conclave of the Hindu here, he asserted that the internet and social media had democratised journalism and revitalised democracy, but had also led to many anxieties.

While the new media was fast and popular and people could choose what they wanted to watch, hear or read, traditional media would have to introspect on its role in society and find ways to earn the reader’s full trust again as "the project of democracy was incomplete without informed citizens – which means, without unbiased journalism."

Debate and discussion were internalised in India’s social psyche to arrive at truth since time immemorial, he said.

"There is no doubt that perception of truth is conditioned by circumstances. The conditions that cloud the truth’s positions are effectively dispelled by a contestation of ideas through debate, discussion and scientific temper. Prejudices and violence vitiate the search for truth."

Expressing happiness to attend ‘The Huddle’ organised by The Hindu, he said the Hindu group of publications had been relentlessly aiming to capture the essence of this great country through its responsible and ethical journalism. He commended them for their insistence on sticking to the five basic principles of journalism – truth-telling, freedom and independence, justice, humaneness and contributing to the social good, an official release here said.

Mr Kovind said dogmas and personal prejudices distorted the truth. In the 150th year of Gandhiji’s birth, he asked all to ponder over this question: "will it not be proper to pursue truth itself as the ideology? Gandhiji has shown us the path by walking ceaselessly in search of truth which would ultimately encompass every positive attribute that enriches the universe."