No possibility of mid-term polls in Karnataka: Siddaramaiah 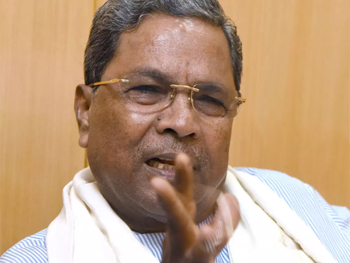 "No, there won't be any mid-term poll," he told reporters in Mysuru, days after former prime minister and JD(S) supremo HD Deve Gowda had sent alarm bells ringing in the Congress after he spoke of such a possibility.

In a sign of growing tensions in the coalition, Gowda last Friday said he has no doubt that there would be mid-term polls to the state assembly, but had backtracked later, saying he had spoken about urban local bodies election.

Gowda had also said he did not know how long the government, headed by his son HD Kumaraswamy, would continue and it was in the hands of the Congress.

Hitting out at state BJP chief BS Yeddyurappa, Siddaramaiah said the former chief minister was"dreaming" about the collapse of the coalition government and him forming a ministry in the state.

"No one can respond to his (Yeddyurappa's) dreams (of forming government and becoming CM). He has been saying it for several times now. Whatever Yeddyurappa has said has not turned out to be true," he said.

Reacting to Siddaramaiah's comments in Bengaluru, Yeddyurappa said he was not dreaming of becoming chief minister as he has been in the post in the past.

"It is you (Siddaramaiah) who is dreaming about becoming chief minister once again and roaming, not me," he said, pointing at the clamour in Congress recently with some leaders seeking Siddaramaiah's return as chief minister again.

The clamour had caused resentment within the ruling coalition, with alliance partner JD(S) leaders and Kumaraswamy not happy about it.

Siddaramaiah and his supporters were forced to clarify that their demand was after the next assembly election.

Stating that the Karnataka Pradesh Congress Committee (KPCC) was dissolved to reorganize the party, Siddaramaiah, who is the Congress Legislature Party leader, said, "We will have new office-bearers and it will be a mix of old, new, young and seniors."

In a major move after the rout in the Lok Sabha polls, the All India Congress Committee (AICC) on Wednesday said it has decided to dissolve the KPCC, while retaining its president and working president.

Siddaramaiah, who is in Mysuru, held a series of meetings with party workers and supporters there.

According to sources, the meeting was to discuss Congress' defeat in Mysuru, Siddaramaiah's home district and Chamarajanagara, where he enjoys considerable influence, as the Varuna assembly segment, currently represented by his son Yatindra, comes under it.

The discussion was also on strengthening his support base in the region, which has deteriorated after Siddaramaiah lost from Chamundeshwari assembly segment during the May 2018 polls and rout in the Lok Sabha polls, the sources added.

The Congress and the Janata Dal (Secular) had to be content with one seat each in the Lok Sabha polls, which saw the Modi wave help the BJP bag 25 out of the total 28 seats in the state.

One seat was won by a BJP-backed Independent.

No possibility of mid-term polls in Karnataka: Siddaramaiah