Nun, who protested against rape accused Bishop, gets notice for complaint against superior 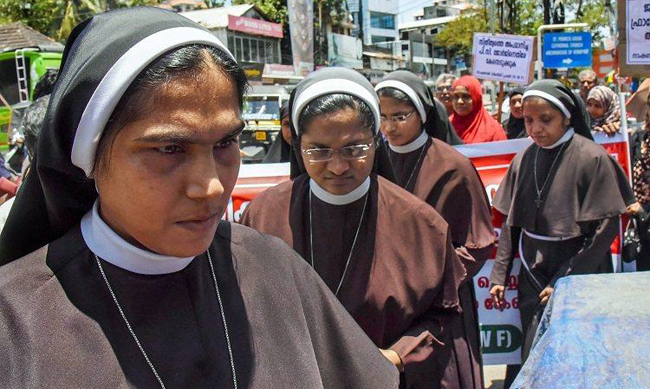 Thiruvananthapuram, Aug 24: Franciscan Clarist Congregation (FCC) on Saturday issued a show-cause notice to expelled nun Sister Lucy Kalappura and asked her to withdraw a police complaint against a local superior. The congregation has also asked the nun to issue an apology to her senior.

Sister Lucy had complained to the police that she was locked up in the convent's room by the senior nun.

However, the FCC said that after going through the CCTV footage, it was found that the "sister superior did not lock you up in your room. She only locked the convent before she went for the Holy Mass. It is her right and duty to keep the convent safe from criminals and trespassers."

It also asked her explanations in writing regarding the police complaints within three days from the reception of this show-cause notice.

"Any failure to give a satisfactory explanation regarding the above may invite, from the part of the FCC, legal procedures against you as envisaged by the Indian legal system, in addition to the provisions of canon law and the proper law of the FCC," it said.

Lucy Kalappura was one of the five nuns who had staged a protest in September last year against rape accused prelate, Bishop Franco Mulakkal.

Nun, who protested against rape-accused Bishop, in trouble for plaint against superior