Mysuru, May 16: Against a backdrop of rifts within the JD(S)-Congress alliance, senior Dalit leader and vice-president of BJP’s Karnataka unit V Srinivasa Prasad said that the saffron party stood firmly behind the state party chief and former chief minister BS Yeddyurappa. 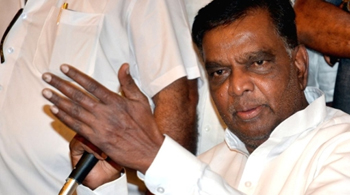 The ongoing spat between former CM Siddaramaiah and chief of the Karnataka unit of the JD(S) Adagooru H Vishwanath has thrown the faultlines among the ruling parties into stark relief. Prasad admitted to being curious about the sequel to the political squabble between senior leaders of the parties, which are ruling the state in coalition.

Dismissing charges of having prompted Vishwanath’s attack on Siddaramaiah – Vishwanath’s remarks against the former CM came close on the heels of his meeting with Prasad – the senior BJP leader said that he would not respond to the ‘war of words’ between the two leaders. “Vishwanath and I did not discuss about politics at all,” Prasad said.

Countering Siddaramaiah’s statements about differences in the BJP, the Dalit leader said that the whole party was firmly behind Yeddyurappa.

Prasad, however, denied being aware of those in the reckoning for the post of the president of Karnataka BJP. Queried about the possibility of a Dalit being nominated to the post, he said, “Aravind Limbavalli’s name has been doing the rounds. The party’s top brass will take a decision.”

Expressing dismay over incidents of poll-related violence reported in West Bengal, Prasad said, “When the Communists were in power in the state, it was Mamata Banerjee who fought against the prevalent political system in Bengal. Now, she is the CM of the state, but Mamata appears to have continued the tradition of violence. Such incidents have been reported nowhere else in the country but West Bengal.”