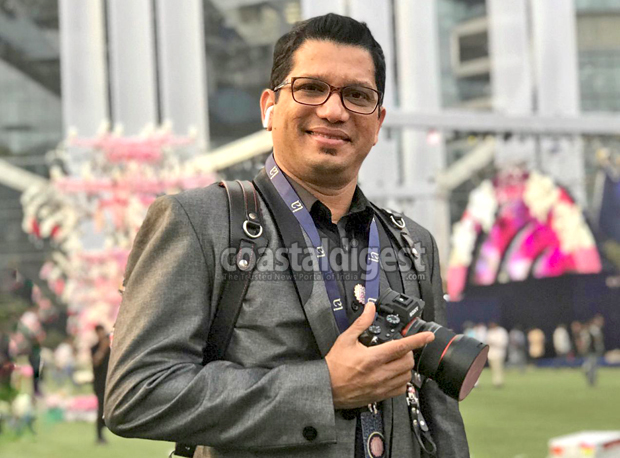 At 47, this photographer from Mangaluru was probably one of the rare invitee who was invited to cover one of the most talked about wedding of Isha Ambani and Anand Piramal.

In a span of 15-days starting from December 1st, photographer Vivek Sequeira and his team of five photographers claim to have captured over 1.2 lakh photographs ranging from house-warming, pre-wedding ceremonies, array of entertainment by domestic and international celebrities gracing the occasion at the fairytale gala. “This by-far is one of the biggest weddings I have covered in my life and was no less than a dream,” says Sequeira.

On how he bagged the photography contract, the winner of ‘Best Wedding Photographer’ awarded by Better Photography in 2010, 2011, 2012 and 2014 , Vivek says it was through the acquaintance of a common friend of Ambani’s and Piramal’s.

“Initially I was not even told whose wedding it was. The person said cover this wedding and ‘Zingadi Ban Jayegi’ (You are set for life). I was told to block my dates between December 1st to December 15th, and send sample of my work in June 2018. Soon after, I was confirmed for the event but the client’s name was kept confidential,” he says.

It was not until October, Vivek first realized that he was going to cover Ambani-Piramal wedding. “I was ecstatic. It took me two days to digest the news. I also questioned 'why me?' as there are many celebrity photographers. I felt thrilled that they selected me based on my talent,” he says.

After signing several confidentiality agreements on photos and remuneration awarded, that does not allow him to share any of those details publicly, Vivek quickly raised the squad of his trusted aides to cover the event.

“Seventeen of us from the firm ‘Luxe Captures’ started by me and my partner Sandeep Katwe left to cover the event. While Sandeep, me and four others covered wedding photography at multiple venues in Mumbai and Udaipur, seven from our team managed videography and drone. The others assisted the team,” says Vivek.

Apart from Luxe Captures, there was another Indian photography team and celebrity photographers from UK, Italy and other countries hired to cover the wedding.

Vivek had to cover the Vastu Pooja and house warming ceremony of the Piramal’s on December 2nd and 3rd in Mumbai, the pre-wedding ceremonies in City Palace, Udaipur on December 8th and 9th. Later, the wedding on December 12th at Ambani’s residence ‘Antilia’ and receptions on December 13th hosted by Piramal family and on 14th by Ambani family at Jio Gardens in Mumbai.

Due to presence of Z plus security, there was limited access. “Sandeep and I were given special id cards as we were official photographers. This allowed us to access different venues, as well as to be in close proximity to the couple, family and the celebrities,” he says.

In a span of a fortnight, the ace photographer says that 30 TB hard-disks were filled with photos in no time. “We have one month deadline to submit the pictures and work has begun on full swing,” he says.

Asked about any of his special memory of the wedding, he says that that at one point he was standing right in between Amitabh Bachchan and Rajanikanth, both stars he has idolized. “I could not help but bend and touch their feet. They smiled and it was a warm feeling,” he adds.

Interestingly, Sequeira who had to drop out of graduation due to financial difficulties had started his career as a petrol pump attendant. “It was on my friend’s suggestion to take up photography, I withdrew the security deposit from my petrol pump manager and brought a Rs 7,000 worth camera. But to withdraw the deposit, I had to quit the job. It was a risk, but retrospectively am happy that I took it,” he says.

After starting his studio in 1997 in Mangaluru , Vivek became a noted wedding photographer , especially among the members of the Catholic community. He has covered weddings even abroad. “I have covered over 1,300 weddings and have at least travelled 15 plus countries for wedding photoshoots,” he says.

While his brother Vinay is managing his maiden venture ‘Vivek Studio’, Vivek decided to start ‘Luxe Captures’ in June this year, and explore the niche market of luxury weddings. “Stating Luxe Captures has proved lucky for me. The Ambani-Piramal wedding is the first contract the firm bagged,” he says.

When asked if he will be covering Akash Ambani and Shloka Mehta’s wedding, he says he has not been contacted so far but would be glad to take it up if given a chance.