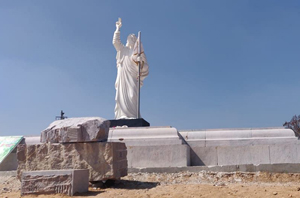 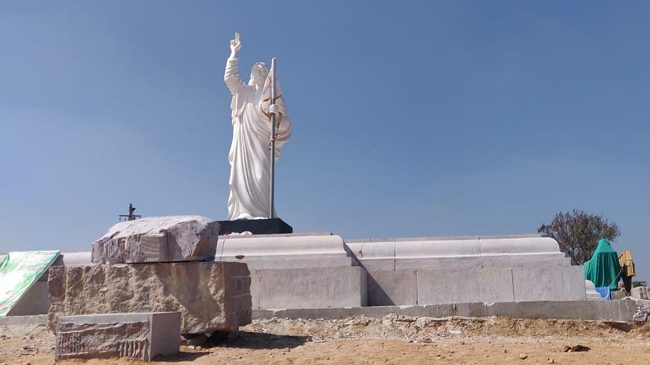 During last couple of decades we have been witnessing the coming up of various statues in different parts of the country. There is diverse political logic and different set of political tendencies for erecting these statues. When Mayawati was UP CM, she got multiple of her own statues made, in addition to many statues of major dalit icons, irrespective of the criticism against that act. As per her strategy it was a symbol of identity of dalit assertion. The biggest statue to come up was that of Sardar Vallabh Bhai Patel, a lifelong Congressman, whom RSS combine is trying to appropriate. This statue of Unity was ‘Made in China’. The clever trick was that the same forces were behind this statue, which was banned by Patel in the aftermath of Gandhi murder. Interestingly while currently BJP is blaming Congress for Partition of India, ironically it was Sardar Patel who was in the committee which gave final stamp of approval for the partition of India.

There is also a talk in UP, where the Ram temple campaign yielded rich electoral dividends for BJP, to have tallest statue of Lord Ram in Ayodhya. In a state where children are dying in hospitals due to lack of Oxygen cylinders, a huge budgetary allocation will be required for such project. While on statues one should also remember that in Maharashtra a tall statue of Chatrapati Shivaji Maharaj is underway in Arabian Sea, near Mumbai. Only few voices of protest against it came up, e.g. that of renowned journalist, now, MP, Kumar Ketkar, whose house was vandalised for his opposing the move on the grounds that same massive amount can be utilized for welfare-development activities in the state.

On the back of this comes a comparatively low budget 114 feet tall statue of Jesus Christ in Karnataka, in Kappala hills Harobele village, where Christian pilgrims have been thronging from last several centuries. The land for this has been donated by Congress leader Shivaprasad and his brother, a Congress MP. It is planned to be carved out from a single rock. The plan of this statue is being opposed by those who have been behind most of the statue projects so far. Hindu Jagran Vedike, VHP, RSS are up in arms saying that they will not let this come up. There are various arguments cited for this opposition. It is being said that this was a place of worship of Lord Munnieshwara (a form of Lord Shiva).

More than this it is being argued that Shivakumar is trying to please his Italian boss in the party. Also that this will bring back the period of slavery of foreign rule, the colonial rule of British. As such this opposition is more in tune with the ideology of RSS combine, which has been for a statue here and a statue there. Their politics regards Christianity as a ‘foreign religion’! It is true that in Citizenship Amendment Act, they have not excluded Christianity while other religion, which they regard as ‘Foreign’ i.e. Islam. Here they are using a different logic, that the countries from where persecuted minorities are coming, are Muslim countries, Pakistan, Afghanistan and Bangla Desh.

In India the major targeting by RSS combine has been against Muslims, but Christians are also not spared. Starting in the decade of 1980, an intense propaganda has been going on that Christian Missionaries are converting. As RSS affiliate Vanvasi Kalyan Ashram became active in Adivasi areas, the likes of Swami Aseemanand, Swami Laxmanand and followers of Aasaram bapu spread out in Tribal areas. They started their programs to popularise Shabri and Hanuman, with congregations like Shabri Kumbh being regularly organized in these areas. The aim was to Hinduize the people in those areas.

The first major anti Christian violence came up in the ghastly form of burning alive of Pastor Graham Steward Stains along with his two minor sons Timothy and Philip. RSS affiliate Bajrang Dal's Dara Siingh aka Rajendra Pal was behind this and he is serving the life term for that. At the same time Wadhva Commission was appointed to investigate this crime which shook the country and President K.R. Narayan termed it as the one belonging to the inventory of the black deeds of human history.

The Wadhva commission report pointed out that there was no statistical significant change in the region where the pastor was working. Similarly the national figures tell us that the Christian population, if at all, has marginally declined in last five decades as per the census figures. They stand like this, percentage of Christians in population, 1971-2.60, 1981- 2.44, 1991-2.34, 2001-2.30 and 2011-2.30. There are arguments that some people are converting to Christianity but are not revealing their religion. This may be true in case of miniscule percentage of dalits, who may not reveal there conversion, as they stand to loose reservation provisions if they convert.

The anti Christian violence is scattered and is below the radar most of the places. There was massive valence in Kandhamal, Orissa, when on the pretext that Christians have murdered Swami Laxmananand, a massive violence was unleashed in 2008. On regular basis prayer meetings of Christians are attacked on the pretext that these are attempts at conversion. While there is a huge demand for the schools and colleges run by Christian groups, in Adivasis areas and remote areas the work of Swamis is on.

Now the trend is to dump Christian traditions. Since Ramnath Kovind became President, the usual practice of Carol Singers visiting Rashtrapati Bhavan has been stopped. In the army retreat so far ‘Abide with me’ by Scottish poet, Henri Francis Lyte, a Christian song, a favourite of Gandhi, has been dropped. The Christian minorities have perceived the threat in various forms. Currently they are as much part of the protests against CAA, NPR and NRIC as any other community.

While statues and identity issues cannot have primacy over the social development issues, it cannot be selective. To oppose Jesus Christ statue while spending fortunes for other statues is a part of the agenda of RSS combine, which is unfolding itself in various forms. opposition to Jesus Christ statue being yet another step in the direction.