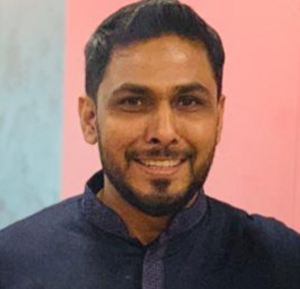 The meeting commenced with the recitation of Holy Quran by Mohammad Ishaq and he enlightened the importance of Charity in Islam and emphasized the audience to come forward and help the needy in the community for its betterment and gain rewards from Allah (SWT). Mohammad Iqbal Shaikh welcomed all the members and guests in his welcome speech.

In his presidential speech, Nizamuddin Shaikh had thanked the committee for giving him the opportunity to lead JF Dammam Unit for the term 2018-2019 successfully. With all the good wishes and support from the Committee, was able to justify the role as President for given 2nd term. He expressed his appreciation and also thanked all the committee members for their enormous support which had strengthened Dammam Unit to lead in the direction of prosperity.

The annual report for the term 2018-2019 was read by the General Secretary Mohammad Azeem Alam. First he briefed about Jam’iyyatul Falah to the audience, which literally represents an association meant for the welfare of less privileged brothers & sisters of the society, which came into existence in 1988. The first and foremost priority of Jam’iyyatul Falah is contributed to EDUCATION, spreading literacy and all round development for the less privileged families in the community. JF also provides scholarships under different schemes for the needy students in twin districts. JF frequently organize the Medical camps, awareness of healthcare, health camps, eye camps and special medical check-up (including ladies by lady doctors) in Mangalore & Udupi. JF also provides Dialysis medical treatment for poor Kidney patients. JF also provide free education in their PU College at Derlakatte for poor girls’ student.

Treasurer Sajid Hussain presented the annual financial reports of Dammam Unit for the Year 2018-2019. This mainly highlighted the financial support given to various programs and activities conducted in Mangalore.

The Trophies of appreciation were awarded to the members appreciating for their enormous support rendered to JF Dammam Unit during the term 2018-2019.

2)      Most Promising Member was awarded to Mohammad Azeem Alam.

Very special thanks were given to the ExCom members for their support in sponsoring the monthly meetings.

Mohammad Afaq dissolved the present committee and the Election Officer Mohammad Ishaq took the dais to conduct the Election. The New Committee of 47 members was formed for the Term 2019-2020. The Office Bearers were unanimously elected by the managing committee.

The newly elected young and dynamic President, Rafiq Nariyar had addressed the new committee and thanked all the members for showing confidence in him to serve the Unit during the elected term 2019-2020. Taking into consideration the support from the new and the outgoing committee, he assured to exhibit his role as President with better productivity with the ‘Vision of Success and Achievement’.

The senior-most member of Jam’iyyatul Falah Mohammed Wahid took the opportunity to encourage the New Committee to work with commitment, devotion, hard-work and determination. Jam’iyyatul Falah is growing day by day and new members should join hands to build a better community back home, he said.

Vote of thanks was proposed by Naushad Saad and on behalf of JF Dammam Unit; he expressed the gratitude to all the members and guests for their kind presence and congratulated the New Committee for their success in accomplishing all the future assignments of Jam’iyyatul Falah.

The Annual General Body Meeting was dispersed with the Dua and the moderator of the meeting Ahmed Kabeer asked to conduct the photo session of New Committee Members.

Blessed to Have such a young and dynamic president and office bearurs for new term to take JF to new heights,

Masha Allah...May Allah take JF a great height of success to render service to our poor, less fortunate and needy brothers & sisters.and may allah bless us to take our organization to great height under the leadership of our new President. Aameen