Ram Puniyani gets police protection after threats from saffron extremists

Mumbai, Jun 9: Social activist and thinker Ram Puniyani, who had received threats and abuse over phone from unidentified saffron extremists on the night of June 6, has been provided 24 hour police protection. 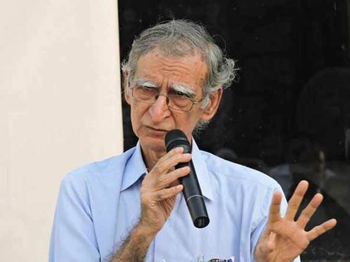 Puniyani, a former IIT Mumbai professor, had filed an FIR with the Mumbai police after he received threat calls. "I am relieved that the police have provided me and my family with round-the-clock protection. Police personnel will be deployed to protect us till the conclusion of the investigation into my complaint," he said.

The police protection was ordered after Puniyani met Deputy Commissioner of Police Sangramsinh Nishandar on Saturday evening. DCP's office will monitor the investigation in the case.

An unidentified caller had accused Puniyani of being anti-Hindu and threatened him to dire consequences if he did not stop his activities. Following this he not only filed a police complaint, but also wrote to the Mumbai Police Commissioner. He also met the Joint Commissioner with a delegation of civil society members.

Citizens for Justice and Peace, a civil rights organisation, also intervened on his behalf and moved the National Human Rights Commission (NHRC) to provide him adequate protection and to ensure that the authorities take the matter very seriously given previous attacks on rationalists like Narendra Dabholkar, MM Kalburgi, Govind Pansare and Gauri Lankesh, allegedly by members of right-wing extremist groups.

Ram Puniyani gets police protection after threats from saffron extremists