New Delhi, Apr 27: The Reserve Bank of India (RBI) has announced that it will issue new Rs 20 denomination banknotes soon.  The new banknote will have a base colour of greenish -yellow and will be 63 X 129 mm in size. The apex bank had first introduced the Rs 20 note in the Mahatma Gandhi Series in August 2001. 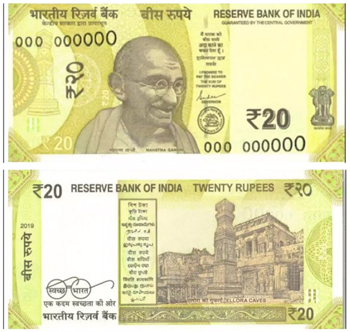 In contrast to the old red-orange colored Rs 20 note of  size 143 X 63 mm, which has a motif of Mount Harriet, the new note will have a motif of Ellora caves on the back side, depicting India's cultural heritage, said RBI in a statement.

The other designs in this new Rs 20 notes will be a geometric pattern aligning with the overall color scheme, both at the front and back sides. The front side of the note will have a see-through register with denominational numeral 100, a latent image with numeral and also a Devanagari version of the same.

The note will have a portrait of Mahatma Gandhi at the center with micro letters RBI, Bharat, India and 20, along with a gurantee clause, Governor's Shaktikanta Das' signature with the promise clause and RBI emblem towards the right of Gandhi's portrait.

And on the right side of the Gandhi's portrait there will be Ashok Pillar emblem and electrotype (20) watermark.