Rebel MLAs back-stabbed me; don’t worry, they will do the same to all of you: DKS 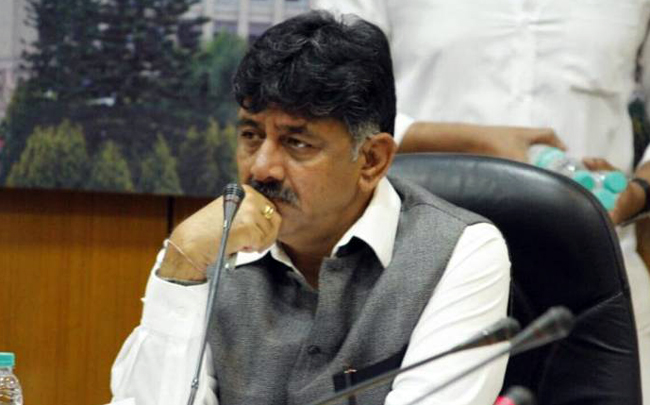 Bengaluru, Jul 23: Karnataka Minister and Congress' chief trouble shooter, D K Shivakumar, on Tuesday said that rebel MLAs staying in Mumbai have backstabbed them, not the BJP, and warned the saffron party that it will be its turn next.

"It's not BJP leaders who have backstabbed me but it's the rebels in Mumbai who have backstabbed me. But do not worry, they will do the same to all of you. They cannot become ministers I am telling you. BJP leaders are being misguided. I went to Mumbai to speak to them (rebel MLAs). I spoke to one of the MLAs there and he asked me to come and take him away," he said participating in the discussion on the confidence motion moved by Chief Minister H D Kumaraswamy.

"We are angry because of the backstabbing by the rebels. It will happen to you as well... You are misguiding them. It is the 11th day (related to funeral rites) and we have to have a flower procession. I'm sad about that," he said.

The Congress leader said that prohibitory orders were issued and he was not allowed to rebels MLAs inside the hotel in Mumbai.

"I worked with them for 40 years. Am I a dacoit? Couldn't I have locked them in my house when I tore their resignations?" he asked.

Shivakumar said that BJP Karnataka chief B S Yeddyurappa has failed six times and now is he close to succeeding.

"Yeddyurappa said long ago that those who are responsible for by-elections should be barred from contesting for 10 years. He argued that there should be a law to this effect. Narendra Modi has got a mandate and we have no problem with that. But you are the leader of this party. Come on!" the Congress leader said.

"This is the time, put a stop to this. Let us bring an end to this! I appreciate Yeddyurappa's perseverance. He failed six times and now he looks close to succeeding. But I don't know how those rebels will become ministers," he said.

Commenting on rebel Congress legislator M T B Nagaraj, Shivakumar said that he was the reason Nagaraj got the MLA ticket in elections.

"I was the reason M T B Nagaraj got a ticket. We spoke to him and he gave a statement as well. Couldn't we have locked them up? No, because we have trust in them....bring them here, let them vote against this government," he said
"I tore the resignations of the MLAs. Yes, I'm ready to accept it. I've been a part of many MLAs' victory," the Congress leader said.

BJP MLA Jagadish Shettar accused Shivakumar of diverting the attention of the House since the Speaker has set the deadline of trust vote today.

"DKS is trying to divert house's attention from the point of order and also divert the rebels' attention in Mumbai," he said.

Responding to Shettar's comment, former Chief Minister Siddaramaiah said that Shivakumar is expressing his pain and accused BJP of misleading the house.

"Shettar says Shivakumar is misleading the house. But the resignations haven't been accepted. The Supreme Court has said they won't fetter the Speaker. It's not Shivakumar but the BJP that has misled. He is only pleading with them to rectify their mistake, don't unnecessarily fall into the trap they've laid. This is not a violation of anything," he said.

"The court order on compulsion is there but X Schedule is in existence, it hasn't been amended. This is why the Speaker clarified that I have right to issue whip and I've already done it. Nobody is above the Constitution; everything has to function in accordance with it. It is the basis. So the question of violation doesn't arise at all and nobody can kill and even the SC cannot overrule it. We gave the rebels ticket and Shivakumar is expressing the pain that they are being misled," Siddaramaih said.

Yeddyurappa said that Congress-JD(S) cannot go against the apex court's order and rebel MLAs cannot be compelled to come to the house.

"In the Supreme Court, the counsel for the government has assured the court that the vote will happen today. Secondly, Siddaramaiah is very knowledgeable about the law but when the Supreme Court says the MLAs can't be compelled you cannot go against it. Besides, the rebels have resubmitted their resignations," he said.

Rebel MLAs back-stabbed me; don’t worry, they will do the same to all of you: DKS