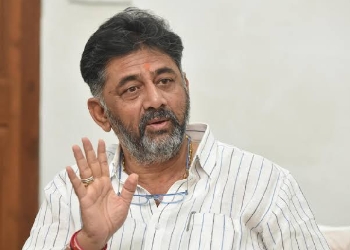 Bengaluru, Jul 11: Karantaka Congress chief DK Shivakumar on Friday raised questions over claims that Rewa Ultra Mega Solar Power Project Madhya Pradesh was "largest in Asia" and said a 2000 MW had been built in the state.

"BJP central government is claiming today that it inaugurated Asia's largest solar plant of 750 MW at Rewa, MP. What then is the 2000 MW Solar Plant in Pavagada, Karnataka which was built in just 3 years by Karnataka Congress government and has been operational since 2018?" Shivakumar said in a tweet.

The Congress leader further said that the most unique thing about the solar project set up in Karnataka was that the farmers were being paid yearly rents for the land upon which it was constructed as it had been leased and not purchased from them, helping them retain ownership.

"The unique thing about the 2000 MW Pavagada Mega Solar Park was that not a single acre of land was acquired from the farmers. All 13,000 acres have been leased from the farmers who are being given yearly rent. Karnataka model of renewable energy was accepted as the best in India," he said.

"Union power minister must answer as to how the Central Government can claim that the Rewa Solar Park (750 MW) opened today is Asia's largest when clearly the Pavagada Park in Karnataka is much larger (2000 MW) and was opened two years back!" he said.