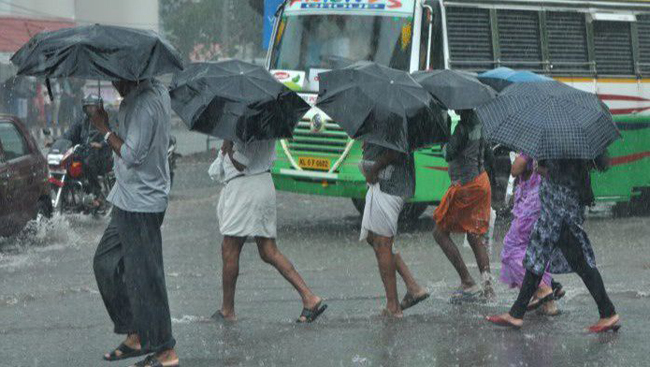 Bengaluru, Jun 5: The much awaited Southwest Monsoon entered Karnataka with widespread rain in coastal and central regions of the southern state, an official said on Friday. Rain and thundershowers are likely to occur at most places over coastal areas and at a few places over the interior parts over the next 24-48 hours.

"The southwest monsoon entered the state on Thursday as predicted from Kerala and the Arabian Sea, with moderate to heavy rainfall in the coastal districts and central or Malnad region of the state," Karnataka State Natural Disaster Monitoring Centre Director Srinivas Reddy told media here.

Though the monsoon has set in on time in the state, Reddy said its progress was likely to be slow in the next three days, as cyclone Nisarga induced high-speed winds took away rain-bearing clouds from the southern peninsula.

According to the regional meteorological office, Karwar in Uttar Kannada district received a whopping 15cm rainfall on Thursday, followed by 11cm each at Kundapur in Udupi district and Shivamogga in Malnad region.

Kadra and Gersoppa in Uttara Kannada and Kottigehara in Chikkamagaluru district had 10cm rainfall, followed by 8cm at Virajpet in Kodagu district and 7cm each at Shirali and Gokarana in Uttara Kannda.

Isolated to scattered rainfall also occurred in many places across the north and south interior regions of the state.

"The monsoon will advance in the state to south and north interior areas after June 8 as there is lull in its movement due to lack of rain-bearing clouds and winds to carry them," said Reddy.

Noting that the four-month monsoon from June to September, crucial to the rain-dependent state would be normal this year, Reddy said its progress and spread, however, would depend on various factors like cloud formations and wind movements.

"Conditions are likely to become favourable for monsoon advancement in the state over the next 2-3 days," asserted Reddy.